A rough track past the “Arthur” trig station and multiple Aboriginal rock engraving sites to Mount Murray Anderson. Great views from the end of the ridge.

I’ve recently discovered how many trig stations are hidden across Sydney’s national parks, so today’s walk is designed to “bag” a trig point and then continue out to Mount Murray Anderson. I’ve got the coordinates (33°39’21.4″S 151°11’58.6″E) of where to leave the Perimeter Trail and set out along the ridge towards Mount Murray Anderson. I’ve allowed plenty of time as I’m not expecting much of a path – so I’m pleasantly surprised that there is a narrow but distinct bushwalking track. 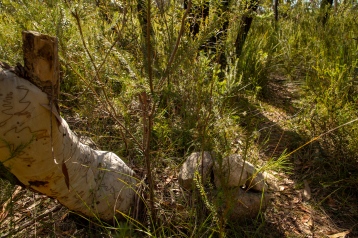 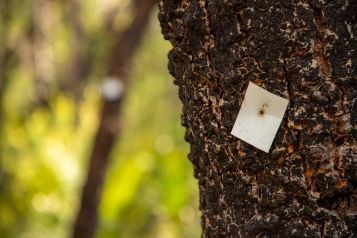 The track crosses a section of low shrubs and tall grass, where I’m surprised again to meet a couple of bushwalkwers heading back along the track. The track then re-enters the dry sclerophyll forest, with occasional glimpses of the valley as a reminder that the track is following the top of a ridge. 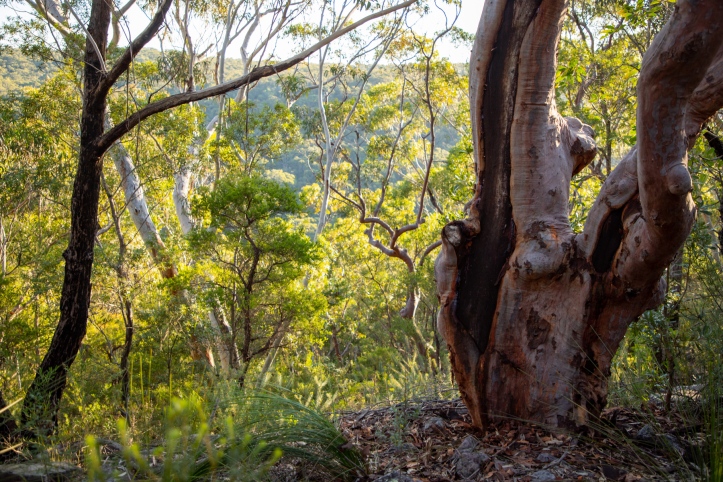 It’s about a kilometre until the track reaches the Arthur Trig (TS649). The stone cairn is in pretty good condition, although the post and vane have been scarred by bushfires. Like many of these trig stations, there is no view from here – the bush which would have been cleared around the marker has grown back over the years.

From the trig point the track heads downhill, and crosses a broad grassy saddle toward Mount Murray Anderson. 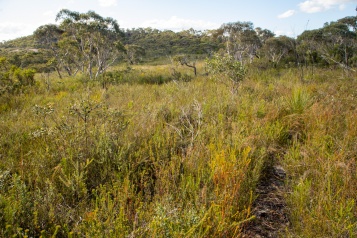 The track reaches a small sandstone platform, which has a faint Aboriginal engraving of what looks like a stingray.

Closer to the base of Mount Murray Anderson is the first of several huge rock platforms, bearing deep “scars” where water has carved long and deep grooves into the rock. 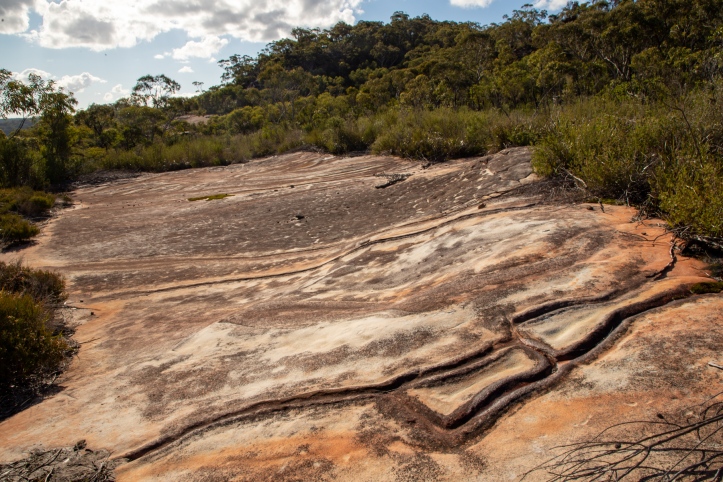 There are a number of fairly clear engravings including on this rock, including two figures, a shield and a circle that may be a full moon (it looks very much like the engravings depicting the phases of the moon at the “Moon Rock” site in Garigal National Park). 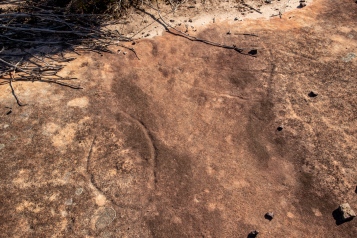 On the next rock platform are two more engravings depicting wallabies or kangaroos. (All the engravings I’ve seen are near the track, even though I explore some of the vast rocky area looking for more rock art.) 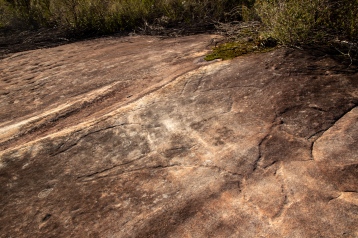 Looking out to the west, on the other side of the valley, is the ridge that the Long Trail follows to the “Peach Trees” lookout at the end.

The track now climbs toward the summit of Mount Murray Anderson, before reaching another rock platform near the summit. I get a bit navigationally confused here, and miss a fairly obvious rock cairn. The track continues straight ahead, along the ridge. Instead, I cross the rocky area towards a series of sandstone caves, and towards the highest point of the ridge. 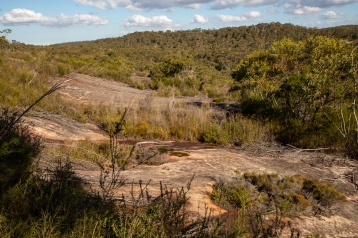 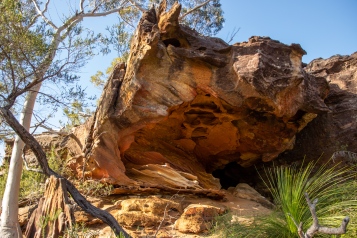 There’s some nice views from the edge of the steep escarpment, looking over Smiths Creek. 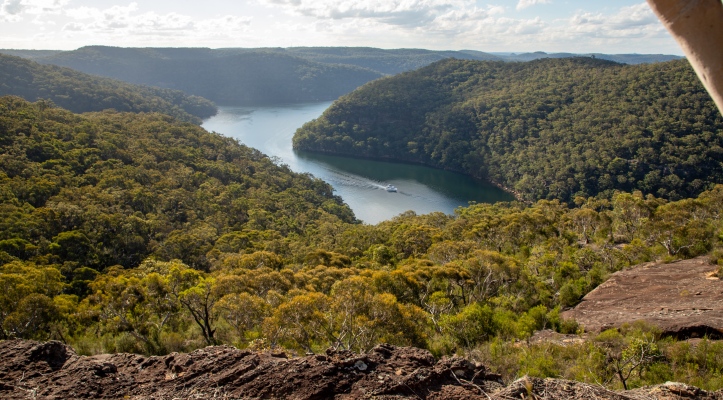 I soon realise that I’m not going the right way, and return to the last cairn, where I quickly pick up the track again. My error was in thinking that the track goes to the highest point of Mount Murray Anderson; in fact it now descends to the end of the ridge.

About 150m south of the end of the ridge is another large engraving, which seems to be a deity from the oval protuberance on its head.

There’s one more faint engraving on the same rock platform (another deity), and then a short climb down to the end of the rocky ridge.

Just before the end of the ridge is an engraving of what seems to be a Daramulum figure or deity. It’s a fairly distinct carving (but hard to photograph with the sun still fairly high), described as: “The figure of a deity, about fifteen feet long, with the chest decorated by diagonal lines, and with a projecting embellishment with feather-like tip”.

Finally I’m at the end of the Mount Murray Anderson ridge, a majestic spot with sweeping views over Ku-ring-gai Chase National Park. Mount Murray was named by the trustees of Kuring-gai Chase in 1936 after Sir David Murray Anderson, a British naval officer and and Governor of New South Wales. It was described as “a high point which stands like a sentinel, overlooking the entrance to Smith’s Creek, between Bobbin Head and Lion Island” (Sydney Morning Herald on 21 Nov 1936 – Trove)

Directly ahead to the north is the confluence of Cowan Creek and Smiths Creek, with Cottage Point on the right. To the east is Smiths Creek.

It’s taken me about two hours to cover the 6km or so to Mount Murray Anderson, with some intentional (and unintentional) side-trips! The return trip to the Perimeter Trail  (3.2km) takes about 45min.

I’ve got a bit of time before it gets dark, so I find the “Wilkins” Trig Station – it’s well-hidden in trees and shrubs not far off the Perimeter Trail. It’s another reminder of how different the landscape must have been hundred years ago. I then head to the end of the Wilkins Track and explore one of the rock ledges further down the ridge, before heading back to the car.