A fantastic loop walk from Alston Drive in Berowra Heights down to Berowra Waters, and back via the Great North Walk and Turner Fire Trail.

I’ve enjoyed the section of the Great North Walk through Berowra many times – but only recently discovered some of the lesser-known tracks around Berowra Heights. Having briefly explored the Turner Firetrail a few weeks ago, I’m returning to do a longer loop walk. I’m starting at the end of Alston Drive, where the “Alston Drive GNW Track” (a very original name!) connects to the Great North Walk. Interestingly the track, which goes directly up the boulders at the end of Alston Drive, is not signposted or shown on the Cowan topographical map.

Near the start of the track is a significant Aboriginal engraving site, which has a group of men engraved on the rock. (Thanks again to Nathan, who provided the location of the site – it’s easy to find when you know where to look, otherwise I would have walked right past it…)

A little further on, the track nears the edge of the ridge, and there are some great views over Berowra Creek and the Berowra Waters Marina as the track gradually descends along the ridge.

A bit further again, at Jans Lookout, there’s an odd and definitely non-Aboriginal engraving on a rock ledge. It may have been made by George Collingridge, also called the ‘Hermit of Berowra’, an artist and art teacher who migrated to Australia in 1879. In 1880 Collingridge settled on 88 acres on a bend in Berowra Creek (now Collingridge Point). Describing Berowra Creek as being “without doubt, far and away the most lovely” fjord, it is probable he would have taken what is now the Alston Drive track to access the northern railway after crossing Berowra Creek by boat. 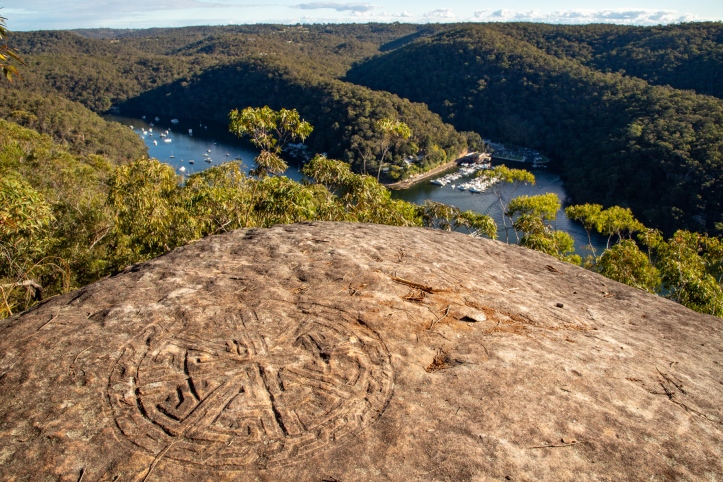 From the lookout, which also has initials that appear to have been carved in 1909 (or 2009!) by Mrs JC, Mr JC and Miss CL, you can see straight down to Berowra Waters Marina.

As the track continues to descend, there are a few more rock outcrops that provide a view up and down the river. 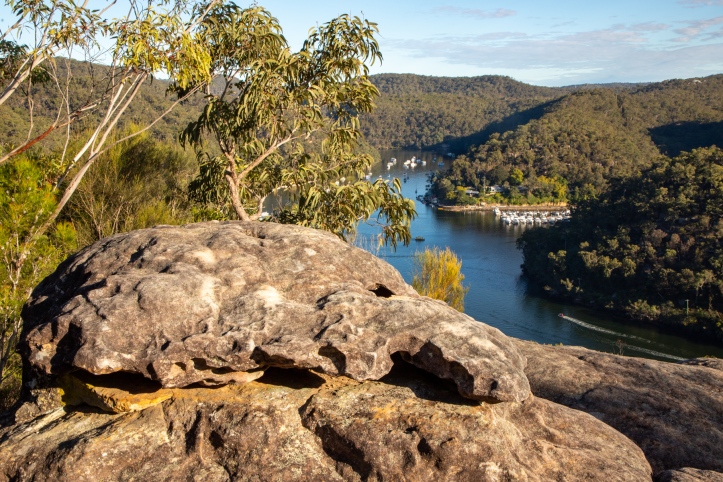 After about 1.3km, the track reaches the Great North Walk (Benowie Track): it descends to Berowra Waters to the east (left) and to an unnammed creek to the west (right). 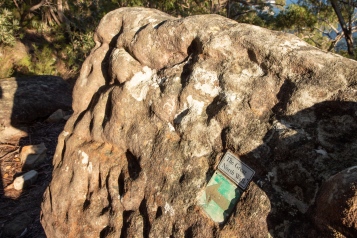 Eventually I’ll turn right to complete the loop, but first I’m heading down to Berowra Waters (or Franks Bight to be more accurate). The Great North Walk track descends steeply through a a gap in the rocks, and then along the base of the high cliffs.

The track quickly reaches Berowra Creek, and follows the water as it heads towards the Berowra Waters Ferry. 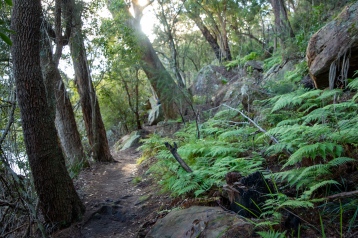 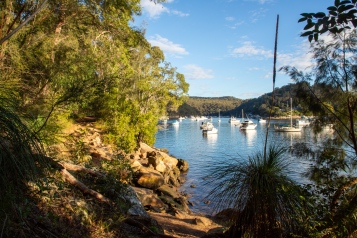 Just before the carpark (at the end of Kirkpatrick Way) is an unusual Aboriginal engraving site, which is on a vertical rock surface. While it’s close to the path, I would have walked past this many times and not realised it’s here. The carvings include a Baiame figure, and a seated Daramulum figure with an infant or small child on his lap on the left (although they are hard to make out).

After traversing the carpark and crossing Berowra Waters Road, the track continues along Berowra Creek, now known as the Hawkesbury Track. In the midde of the track is an engraving of a fish, which is of non-Aboriginal origin and thought to have been carved in the last fifty years. 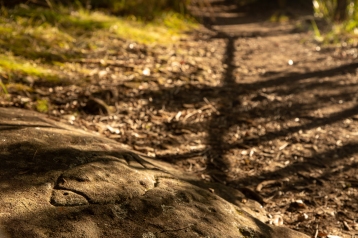 My last stop before turning back is Washtub Gully, which has two deep circular rock holes just before it reaches Berowra Creek. Supposedly early settlers in the area did their washing here, hence its name.

It’s also the site of more Aboriginal engravings, including multiple fish, a bird and a large possum or a quoll. (Interspersed with this rock art are more modern initials and symbols carved into the sandstone.) 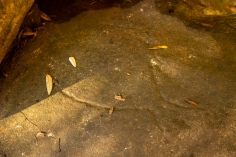 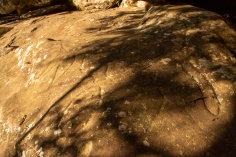 Nearby is a cave and some more carvings that look like they may Aboriginal rock art, although I’m not 100% sure.

This is far as I go today – the Hawkesbury Track continues along Berowra Creek, ascending the valley to Berowra station or following the creek all the way to Crosslands and along to Hornsby or Thornleigh. I’m returning along the creek and back up to the junction with the Alston Drive Track. 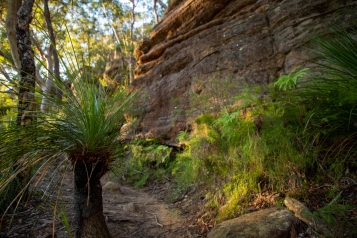 Reaching the junction on the ridgetop, I drop down the other side of the ridge to cross a small stream. 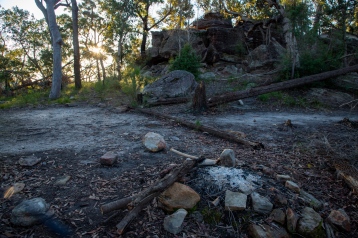 There’s a nice spot where the second branch of the (unnamed) creek cascades over a series of rock ledges, to a fern-fringed pool at the bottom.

The next section is the most challenging and fun, as the track weaves through and over rock outcrops and past The Roland Murray Bench, where there’s a huge overhang. A few of the larger boulders have metal rungs. 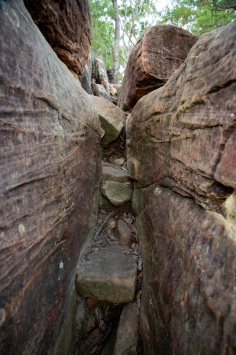 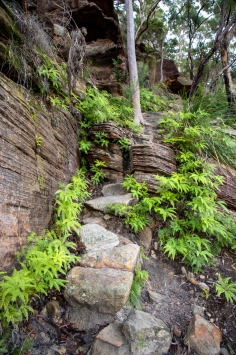 At the top of the next ridge there’s a large rock platform, with views over Berowra Creek.

I make a slight detour around a loop track which (according to my map) provides a lookout point. While it’s a pleasant and easy walk, the views are not particularly good – it seems as if the vantage point has become overgrown and trees now block the water views.

Near the end of the Turner Fire Trail, I catch the sun setting over the Berowra Valley – a nice end to what’s been a great walk. 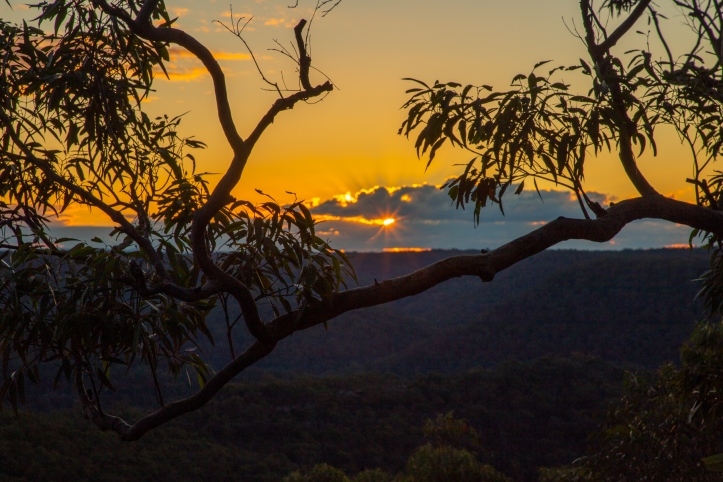