A short bushwalk that combines the popular Sphinx Track and the less-used Sphinx Trail with an off-track section to form a loop.

A popular Bobbin Head bushwalk is the Sphinx/Warrimoo loop, which connects the Sphinx, Warrimoo and Bobbin Head tracks to form an 11km circuit. But there are actually two Sphinx trails; the popular Sphinx Track and the less-travelled Sphinx Trail. It’s possible to link these to form a much shorter loop…

I’m starting near the national park entry station, as the Sphinx carpark gate closes at 5:30pm, and walking down the road to the official start of the walk.

Ignore the well sign-posted Sphinx Walking Track (unless are you doing the loop in the opposite direction), and continue along the Sphinx Trail. It’s a wide fire trail and is easy walking as it gradually descends – you’ll probably have the trail to yourself. 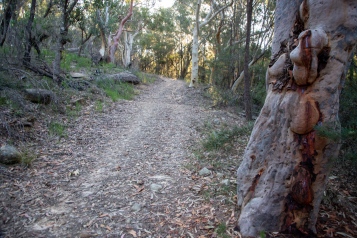 Near the top are some interesting caves and rock formations – otherwise there isn’t much to see along the trail.

The Sphinx Trail ends above a small cliff, with filtered views across the valley. I’m not sure the reason for the Sphinx Trail – there’s no electricity pylon here (a common reason for fire trails) or other practical purpose of this trail.

There is no marked route from here down to the Warrimoo Track – but there is a fairly obvious way through a cleft in the rocks and then down the end of the ridge. There’s not much undergrowth so I don’t try too hard to find a trail – it just as easy to walk directly down, around a few boulders and fallen trees. 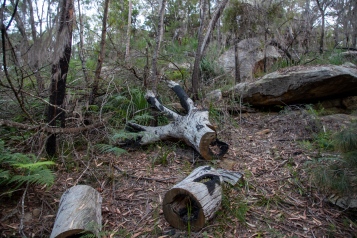 Where the “track” joins the Warrimoo Track, there’s a wide sandy beach. It’s directly opposite the end of the Bibbenluke Track, that I walked a few days earlier.

There are three kids swinging off the rope into the water, on the opposite side of the creek. It’s obviously pretty deep here! And fairly cold, but that does’t seem a deterrent! 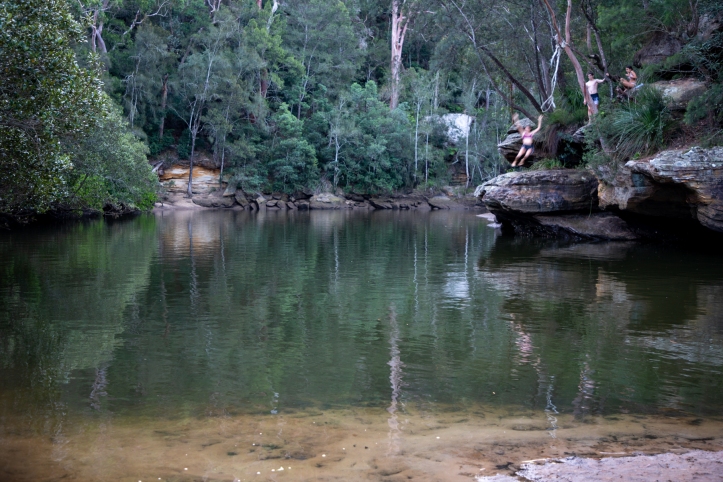 From here there’s a short distance along the Warrimoo Track, crossing a small creek, before reaching the junction with the Sphinx Track. 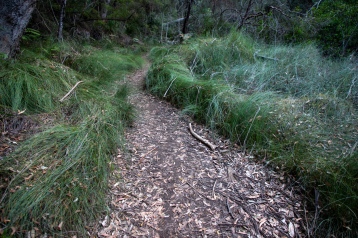 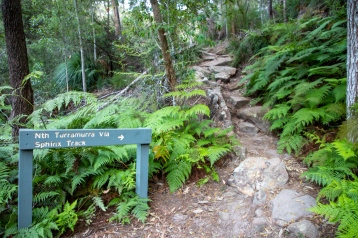 About half-way along the track, it re-crosses the creek and passes a large sandstone cave.

Rather than walking back up the road, I turn onto the Sphinx Trail, which joins the Bobbin Head Trail just before it reaches Bobbin Head Road. It’s a nicer way back up to where I left the car.

Overall, it’s been a nice walk – although the Sphinx Track is much nicer. So if you don’t want to do the longer Sphinx/Warrimoo loop, you might want to just go down and back up via Sphinx Track!