A steep hike up to to the top of Gunung Machinchang (701m asl), the second highest mountain in Langkawi.

After a stop-over in Kualu Lumpur, where I did the Bukit Tabur East trail, I’ve got a three-day conference on the island of Langkawi. Fortunately there is a bit of spare time in the agenda, and a Google search suggests Gunung Machinchang – also spelt Gunung Mat Cinang – is a good option. (For other mountains you can tackle, see Which Langkawi mountain should I climb? at the bottom). Especially as the start of the hike is a short walk from my resort, at the somewhat tacky Oriental Village, which is at the base of the Langkawi Skybridge cable car. Rather than following the main road, I find a quiet service road that follows the river away from the village. 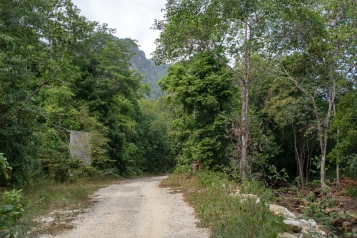 A walking trail from the road crosses the river near a cluster of shops at the Pantai Kok area, where you can buy drinks and souvenirs. There are also some toilets here. 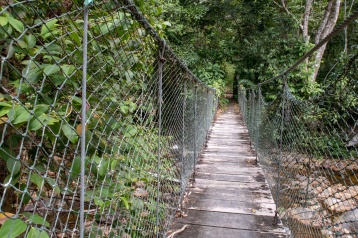 A series of concrete steps – 638 of them to be precise – go up the hill to a famous waterfall (Air Terjun) and the Seven Wells (Telaga Tujuh). There’s a few people around, although it’s not too busy on the trail.

I make the small detour to the waterfall, which has a decent amount of water (although we’re in the dry season – would be more spectacular during the wet season). It’s a popular spot, and there’s a quiet a few people in the water or sitting around the waterfall and swimming hole.

The top part of the falls and Seven Wells (above the falls) can be see from the Skybridge cable car. 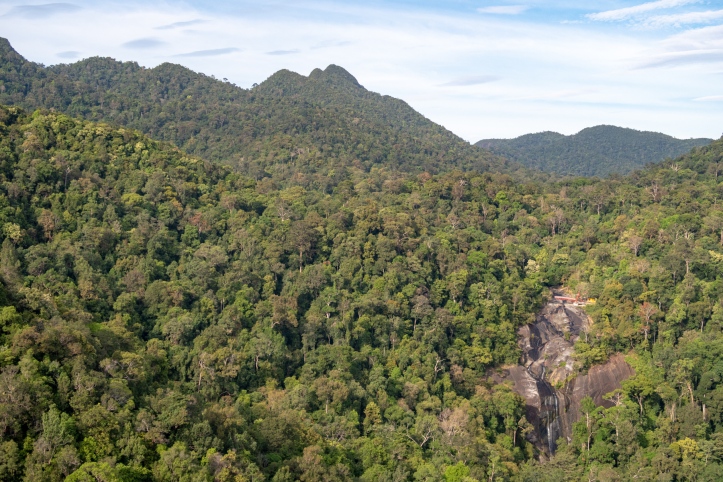 The concrete path continues alongside the road up to Seven Wells. I see a few grey/brown macaques here – the first ones I’ve seen so far on the island. They are not scared of humans, but avoid getting too close. The dense rainforest here is dominated by giant trees and strangler figs. 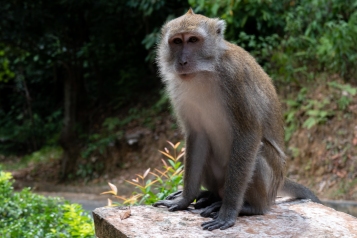 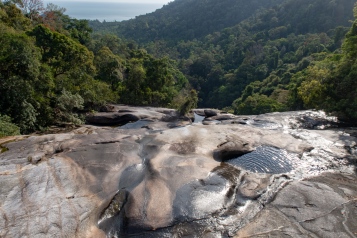 The signposted path to the Machinchang peak start at the top of Seven Wells, with a guidance of two hours (one way).

The trail is initially fairly flat, as it follows the river upstream, crossing it a couple of times on sturdy bridges.

About 500m along the trail, past the first of two campgrounds (Kem Saintis), an unmarked side-track leads to a small pool in the river. Deep enough for a dip, it’s a beautiful spot for a break – especially as there’s a good chance you’ll have it to yourself.

The trail leaves the river and starts to climb more steeply from here, past another campground (Tokayah Camp) which is 1.6km from the start. 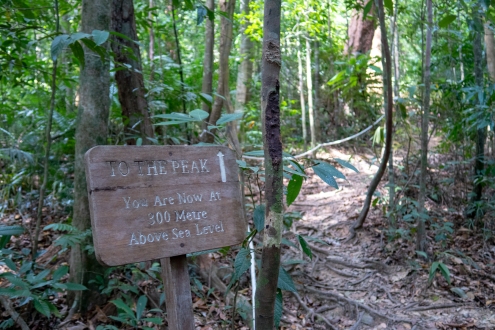 The jungle is still dense with lots of shade, and some impressively tall trees, often with huge buttress roots. (I don’t see any wildlife, but you may see macaques, dusky leaf monkeys and hornbills.) 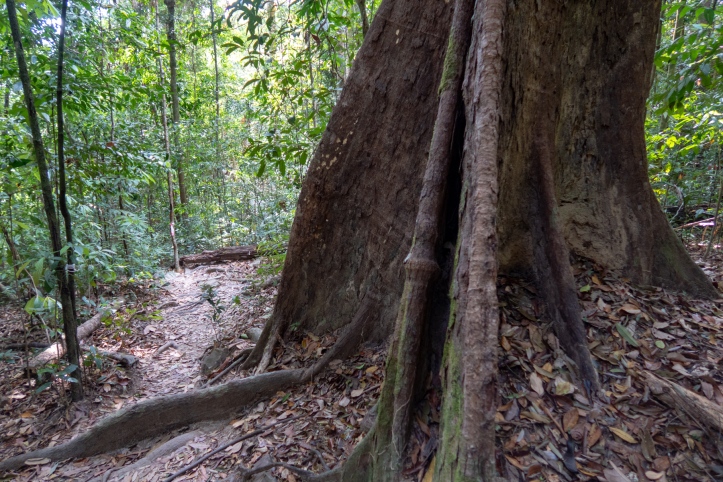 As the track gets gradually steeper, there’s a somewhat confusing sign that states 930m down / 30m up – although we are nowhwere near the peak. And it’s about 2km back to Seven Wells. On one of my topographical maps the trail stops here; in reality, the trail swings to the west, leaving the ridge we have been following and climbing a steeper ridge. 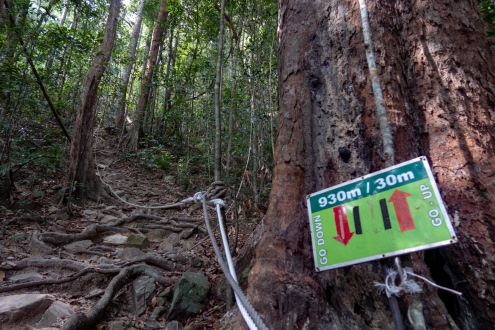 From this peak-that’s-not-really-a-peak, the track traverses side of the ridge for a short distance and crosses a (dry) stream, before another steep section where the track is quite eroded. As you can see from the previous photos, there’s a fixed rope along the track for most of its length. You really don’t need the rope, but if you’re doing the walk very early (or late) to catch sunrise or sunset, it makes it very easy to follow. 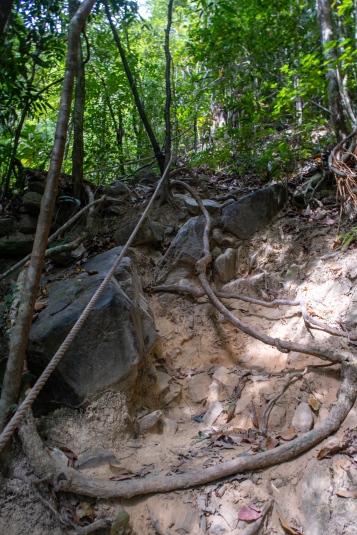 The steepest section is just before the track approaches the side of a huge rock outcrop, then follows the edge of the cliff face. Here the rope comes in useful – or you can use the many exposed roots to clamber up the steep and often slippery track.

Almost there…! The vegetation changes near the peak, becoming more exposed and with smaller trees and shrubs. Although the track is a little less steep, I miss the shade! The last section is quite rocky, but for with views for the first time to the south.

The best view, I think, is just before the peak looking south from the trail along the Machinchang mountain range to the mid and top stations of the Skybridge cable car. (The Machinchang range consists of a number of peaks, which all share the same name – the summit here is 701m above sea level. The cable car also goes to a peak called Machinchang, reaching 708m asl. The mountain range is comprised of deltaic sandstone formed 550 million years ago during the Cambrian period of the Palaeozoic Era, and is the oldest rock formation in Southeast Asia.)

I’ve got the small summit of Gunung Machinchang / Gunung Mat Cinang to myself, which I reach at 4:30pm (it’s taken me 1.5 hours from Seven Wells to reach the top). I’m surprised how many people I’ve seen descending, as I made my way up – I would be avoiding the middle of the day, when it’s hottest. If you can, go early in the morning when it’s clearer – and less hot. 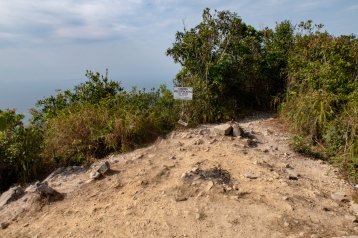 Although it’s a bit hazy there are views south to the Skybridge cable car and Telaga Harbour, with many of the islands that lie off the coast of Langkawi. To the north-east you can just see the ocean in the far distance, and Gunung Raya (the highest peak on Langkawi). 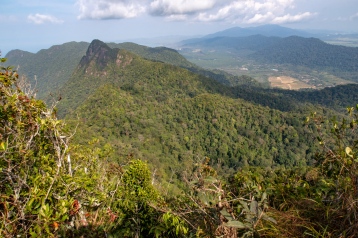 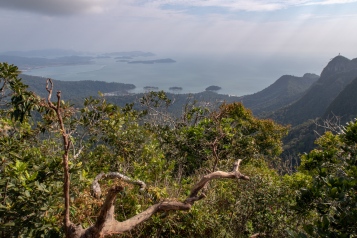 With a conference dinner to get to, I head back down after a brief rest at the top. It’s much easier going down, with just a couple of sections where I need to take it very slowly, and use both hands to avoid slipping. By the time I reach the bottom, I’m pretty exhausted and ready for a beer!

Which Langkawi mountain should I climb?

There are a few different mountains you can reach the top of in Langkawi:

Which Langkawi mountain is best? For the best views, take the cable-car up to the top of Machinchang. Or, for a sense of accomplishment and a great hike, I’d recommend the hike up Gunung Machinchang!

The attraction of this summit is the only way you’ll get there is by walking up the steep track through the jungle, as described above. Go early morning if you can, and avoid going if it’s wet or raining. The views are similar to those from the cable car, but you get 360-degree views from the cable-car viewing platform.

Same name, different peak… there is no trail to the cable car middle or top stations. So you’ll need to pay to take the Skybridge cable car or “SkyCab” up and back. Taking about 15min to the top, it’s the steepest cable car ride in the world. The section up to the middle station (where you can get out) is pretty impressive as it crosses high above the rainforest. The cabins hold up to six people, but if you’re luck you might be on your own, as I was. 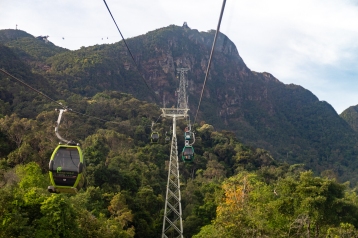 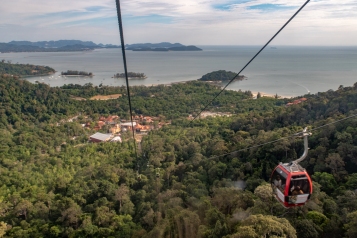 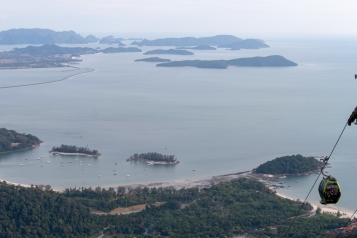 The views from the middle station and the top are great – arguably more impressive than from the other Machinchang peak as there’s none of those annoying trees in the way! 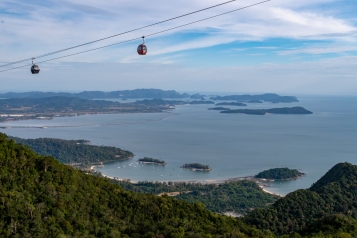 A short walk from the top station is the (also optional) SkyBridge, the longest free span and curved bridge in the world. At a height of about 660m above sea level, the bridge is suspended from a 82m high single pylon and hangs about 100m above the ground. 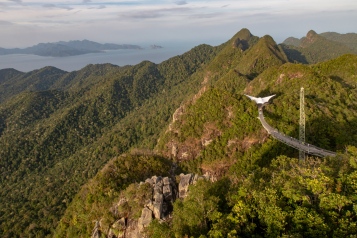 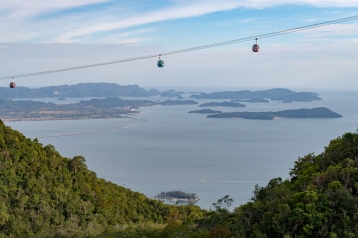 I didn’t have time for this one – the highest mountain on Langkawi. Interestingly, Raya and Mat Machinchang are related by legend and history:

The story goes that once upon a time there were two giants named Mat Cincang and Mat Raya: though they were extremely close friends, one day at the wedding reception of their children, the two got into a squabble. Each grabbed items nearest to them (pots and pans) to throw at the other. In the middle of the mêlée a number of famous spots around Langkawi were created. A pot of gravy fell in Kuah town, thus resulting in its name (which means gravy in Malay), a bowl of hot water fell in Ayer Hangat (hot water) and a jar was broken in Belanga Pecah (broken crockery). When the two giants finally came to their senses and realized what a mistake they had made by fighting with each other, they decided to atone for their mistakes by being turned into mountains. 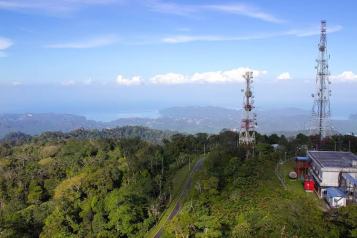 You can get to the top of Gunung Raya via a walking trail with 4,287 concrete steps, or by road. Allow about 3-4 hours if walking; by taxi I was quoted about RM120 (USD$30) for round-trip. For more info, a couple of blogs cover this walk: