A full-day hike on the north outskirts of Dunedin to Pulpit Peak, the Painted Forest and Silver Peak. The return route goes via ABC Cave and the Philip J Cox Memorial Hut to form a loop.

I’ve got one full “hiking day” left in our two week New Zealand holiday; after researching options within striking distance of Dunedin, I settle on Silver Peaks Scenic Reserve. A 30min drive from Dunedin and about an hour from where we’re staying on the Otago Peninsula, it seems to offer some interesting scenery and demanding trails. (The name Silver Peaks is said to be named after the Silver Stream, which flows down from the higher ridges.

The start of the Silver Peaks Track on Mountain Road is clearly marked, as it heads up towards Green Ridge.

Climbing gently at first through low but often dense scrub, there are occasional views over the Silver Peaks Scenic Reserve. 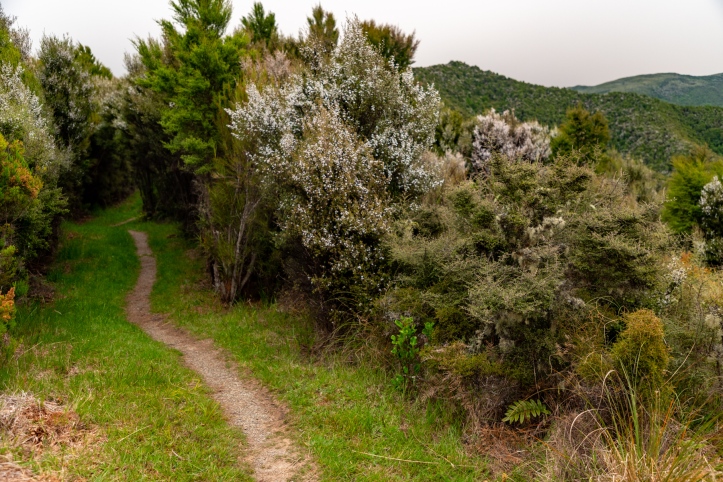 As the track gains altitude, the views to the south and west improve, with rolling hills as far as the eye can see. The native shrubs are dominated by manuka, or New Zealand teatree, a prolific shrub.

After 3.8km I reach the site of the former Green Hut, now a picnic and camping area (the hut, possibly the first tramping hut in the South Island, has long been removed). A sign here warns that the route from here is only for “experienced trampers” – while the quality of the track doesn’t change, the signs have been added in recent years as a result of the highly changeable weather on the exposed ridges (there have been some deaths and a few rescues of people who got lost in bad weather). The track gets a bit steeper here and after a few hundred metres reaches the junction of a minor track up to the summit of Green Hill, marked by a tiny label nailed to a tree. 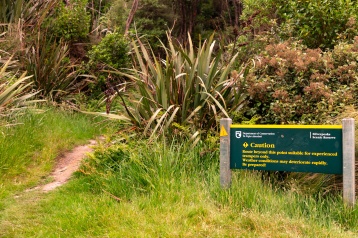 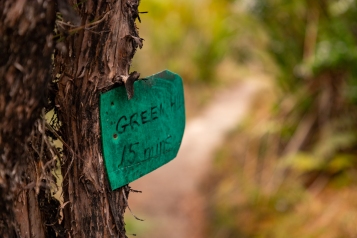 From here the trail is soon above the tree-line, and continues through dense manuka scrub as it heads up to Green Ridge and Silver Peak.

Looking back is Green Hill. To the south and west there are great views towards the outskirts of Dunedin in the far distance.

Looking back to Green Hill 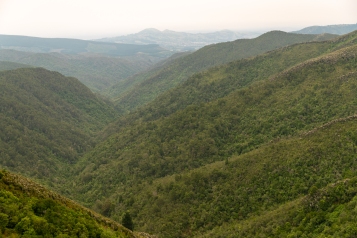 The Silver Peak Track now starts to climb fairly steeply along the Green Ridge; looking back you can see the trail stretching back past Green Hill.

From the top of the ridge there are now also views to the east, with the coast and Blueskin Bay visible through the haze (smoke from the bushfires burning around in Sydney have reached New Zealand, reducing visibility). Other than the haze it’s a clear day which is good, as the ridge is quite exposed and the Māori name for this section is Paekohu, or “fog ridge”.

Further along the ridge there’s a junction with a track that heads down Long Ridge, and then Pulpit Rock (750m asl) comes into view. You can scramble to the top of Pulpit Rock, but the main track passes to the right (east) of the rock formation. 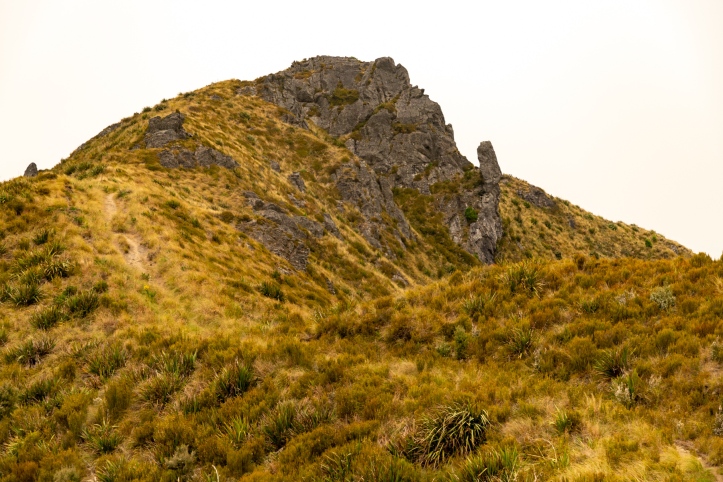 The narrow trail is now fairly flat as it follows the top of the undulating ridge – in the distance (on the furthest peak) I can just make out the beacon that marks the top of Silver Peak. 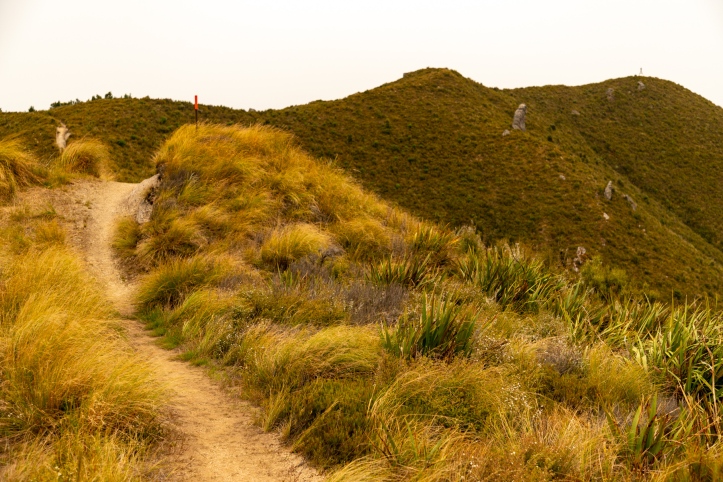 About half a kilometre past Pulpit Rock is another track that heads down a side-ridge to the west, and soon after this junction there’s a view from the main track down into the Painted Forest. The largest remnant patch of Silver Beech in the area, the forest looks like it has been painted. I’m not entirely convinced – if I hadn’t read about this or seen it marked on the map, I don’t think I would have taken a second glance. But, make up your own mind! (There is a marked track the goes down into the forest, where I’ve read there is a hut – Dark Horse Hut – which is not shown on any of my maps.)

There’s another interesting, solitary rock formation between the track and Silver Peak, so I make a short detour on a rough track that leads to the base of this column of rock.

The track stops near the base of the rock, so I scramble a short way up the fairly steep side of the mountain to the summit of Silver Peak (767m asl), marked by a beacon or trig point. Known in Māori as Huatea, Silver Peak boasts impressive 360-degree views, despite the smoky haze, with hills and low mountain ranges in most directions.

To the south, back along the Silver Peak Track, is the edge of Dunedin.

The highest point of the track (fractionally higher than Silver Peak, at 777m asl) is actually a little further along the track, and is unmarked. There are some nice views again from here. 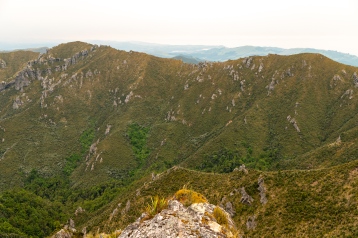 Just after this “unnamed peak” the track descends, very steeply, down the Devils Staircase. I can see Jubilee Hut in the distance, on the left hand-hand side of the valley. There’s no stairs and few switch-backs for 340m descent to the valley – even when it’s dry.  I take it very slow and slip a few times. If the track was muddy, it would be even more challenging. It has been described in the Otago Times as: “It’s slippery, it’s a goat track, it’s narrow, it’s rocky, it’s that horrible clay that when it gets wet you are going to end up on your arse. It’s a nasty little steep short piece of track that’s not well-formed.” 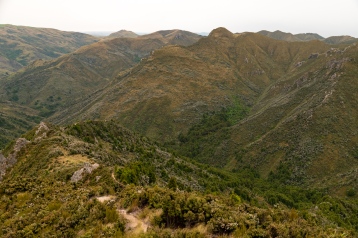 Near the bottom are some colourful flowering plants, which seem a bit out of place – I’m pretty sure they are foxglove (Digitalis purpure), a weed in New Zealand.

At the end of the descent is Cave Creek, and a small camping ground near the creek. The track now follows the often picturesque stream downstream, crossing it a couple of times.  This section is very muddy in sections, and it’s hard to avoid getting wet and dirty shoes (proper hiking boots would come in useful here).

After about half a kilometre down the valley, there’s a sign pointing to Jubilee Hut, a short way up the side of the valley. The hut has ten beds; there were two families staying the previous nights, who I met returning the same way.

I’m returning via the Silver Peak Route, which is classified as “a route for experienced trampers only” and is far less used the Silver Peak Track. It seems much more interesting to do a circuit (although it means the last part of the walk is along Mountain Road). The track continues along Cave Creek for a few hundred metres. 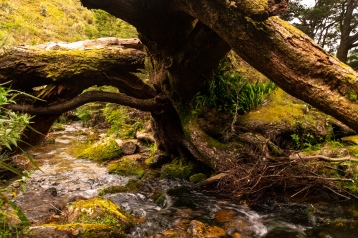 There’s a very nice, elevated camping site that would make a great spot for 1-2 tents, if you’re camping rather than staying at Jubilee Hat. The remains of the old Jubilee Hut, built by members of the Otago Tramping and Mountaineering Club in 1951, lies next to the track. All that remains is the fireplace. 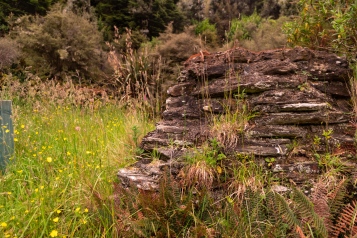 From the old Jubilee Hut site, the track climb steeply up the ridge to the north. While the track itself is often hidden under thick ferns, it’s signposted by regular orange markers. 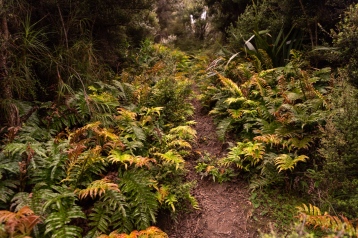 As the track gains height, you can see the (new) Jubilee Hut on the opposite of the valley, and there are views down a side valley. 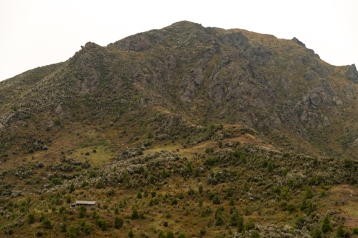 Looking down side valley

At the top of the ridge, the track meets an old farm track by a gate and continues along the ridge-top.

On the other side of Christmas Creek is Christmas Creek Hut (also known as ‘Orange Hut’ and ‘The Homestead’); this six-bunk hut is just outside the Silver Peak Scenic Reserve on a pastoral lease and is a private farm hut.

The track now follows the top of the ridge in a north-easterly direction, through tussock grass. Navigation is easy, but it’s surprisingly hilly and quite tiring. 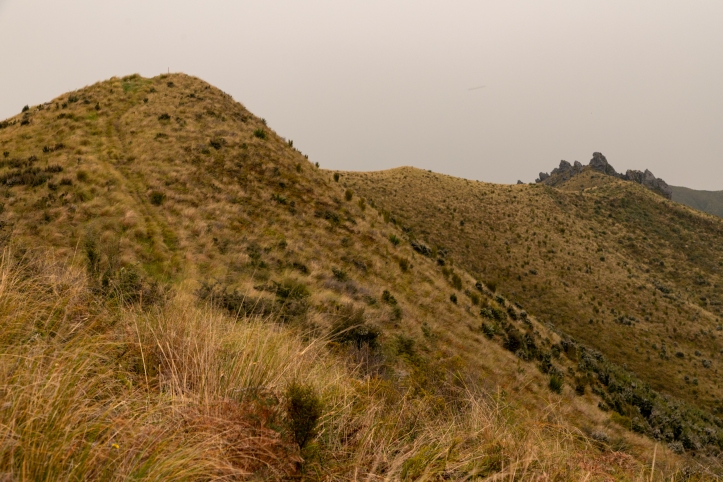 The next step, about 3km (one hour) from the junction with Jubilee Hut, is ABC Cave. The cave is named after three young Dunedin hikers, Al, Bruce and Colin, who often used the cave in the late 1960s. Inside the cave is a timber sleeping platform, and a small creek 50m away provides water. I have a break here and re-fill my water bottle – and enjoy my first short break as is starts to drizzle slightly. 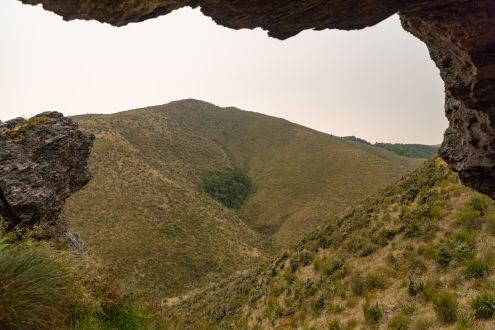 From the cave, the track continues to follow the ridge, passing a junction after one kilometre with two tracks: one going north to Lamb Tree Road and the other north east to Mountain Road. The main track now swings to the east along Yellow Ridge. 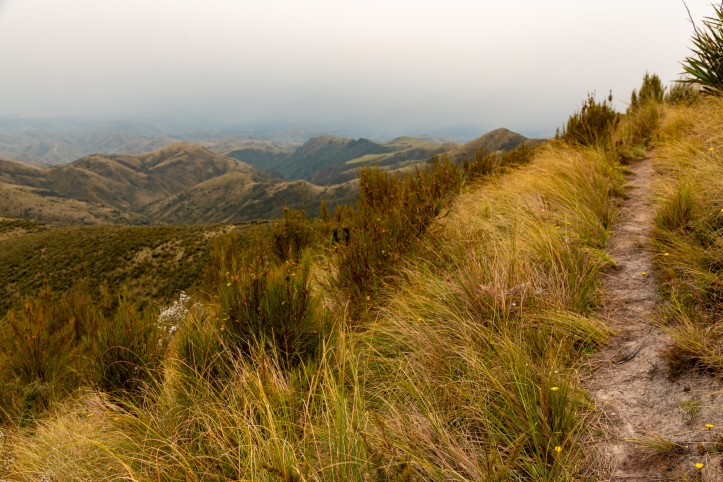 There’s a few uphill sections as the track follows the undulating ridge-line, but it’s generally downhill from here. 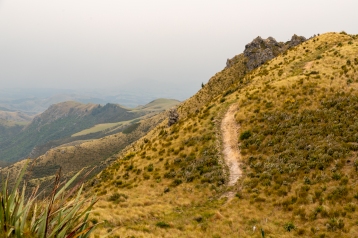 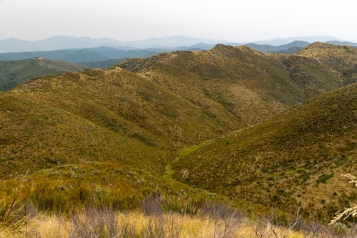 As the track descends, it first enters some thick, scrubby forest and then a more rainforest-like environment, before reaching the Philip J Cox Memorial Hut. This small 4-bunk hut is located in a small forest clearing, and would be more appropriate for an emergency than as destination.

From the hut, the track descends steeply down to the river, through tall forest and dark green ferns. 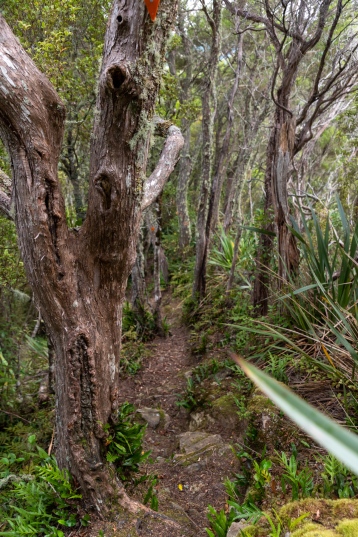 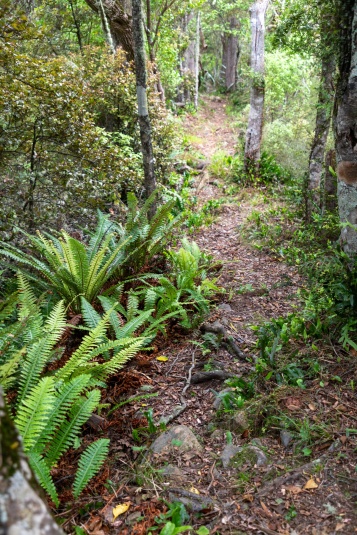 As the track nears the river, it gets even steeper, and there are a few ropes to help navigate some of the almost vertical sections, that are also muddy and slippery. 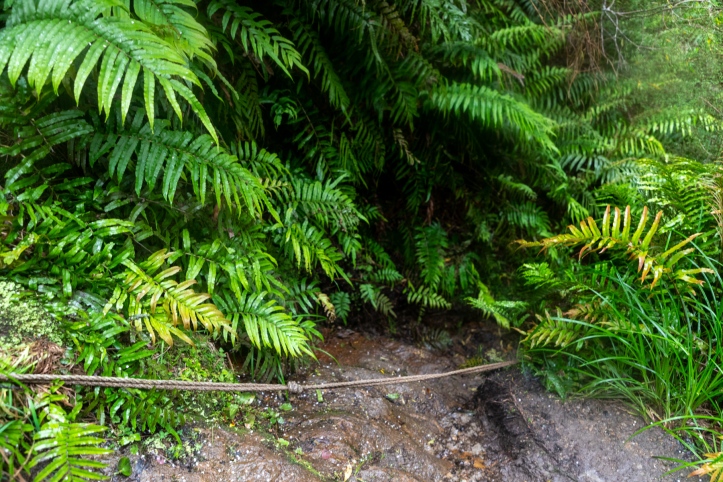 At the bottom is the south branch of the Waikouaiti River, which could be challenging to cross after heavy rain. Today it’s not too deep or fast-moving, and I manage to rock-hop across without getting my feet wet (although they are already pretty wet and muddy from the last part of the track down to the river).

Unfortunately, most of the 250m descent from the Philip J Cox Memorial Hut now has to be re-gained to get back up to Mountain Road. I’m not looking forward to the climb, if it’s as steep, slippery and muddy as the track down. I’m somewhat relieved that the “Tunnels Track” up is an old logging road, through an old pine forest. It’s rather uninspiring scenery, with just a few green ferns to offset the monotony of the pine trees. But despite the ascent being just as steep as the track down, it’s quite easy walking and doesn’t take too long to reach Mountain Road. 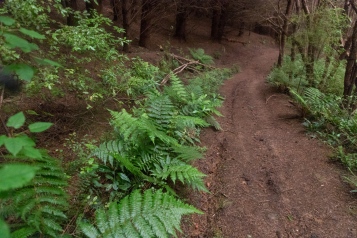 Once back on the unsealed Mountain Road, it’s a rather boring 6km walk back to the starting point of the hike. The road is closed to traffic, so at least I don’t have to worry about cars. But it’s a logging road, so the views from the road of clearfelled trees is not exactly the most imspiring

Apart from the last “road bash”, I’ve really enjoyed this hike. It’s been challenging: almost as much elevation over 20km as the 38km Routeburn Track I did a few days earlier, and some muddy and slippery sections. But the scenery is quite varied, there are some great views and for the five hours from Jubilee Hut I havent seen any other walkers.