My last hike in Yosemite was in April almost ten years ago; my planning consisted of little more than booking some accommodation and purchasing a map. As I get closer to the park and realise there is a solid wall of snow on both sides of the road, it crosses my mind that perhaps I should have done a bit more research. And brought more than just a T-shirt and shorts to wear…

This time it’s a very different experience. I’m surprised how warm the weather is at the end of August, and even more surprised at how busy the park is. I make an early start to hopefully avoid the crowds, leaving Tuolumne Meadows Lodge just after sunrise for the Sunrise Lakes Trailhead. There’s no traffic on the road and the mist is rising off the meadows along the road. 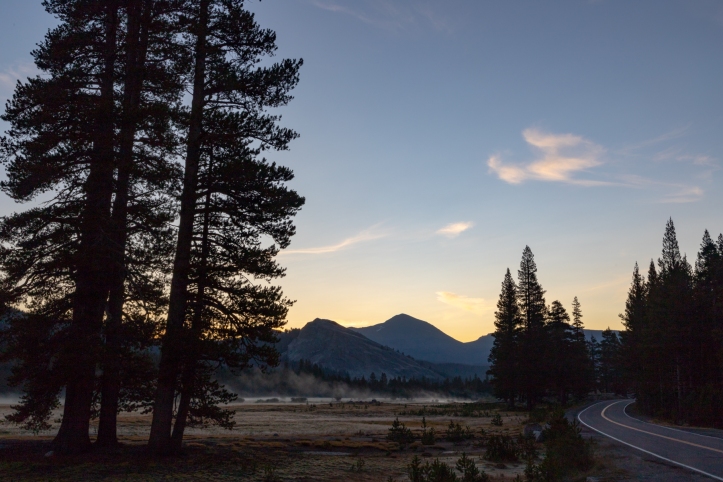 I’m not exactly sure the route I’m doing, but the plan is to head up to Clouds Rest, which was completely impassable due to deep snow last time I was here. The trailhead is clearly marked, starting near the southern end of Tenaya Lake on Tioga and, and is initially fairly flat and easy walking.

It doesn’t take too long until the path starts climbing, and I overtake a few groups of hikes that have also started early (as a result of Half Dome permits being hard to obtain, Clouds Rest is one of the popular alternatives). 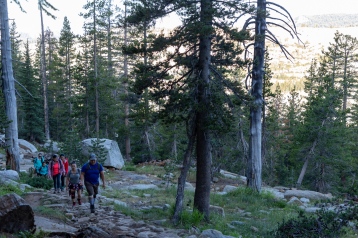 After 3.5 miles (about a mile past the turn-off to Sunrise Lakes) the track passes a small, unnamed lake. The completely still water reflects the sky and surrounding pine trees, and makes a good spot for a brief stop.

From the lake there’s another gradual ascent up the ridge, with the trees seeming to get bigger as I climb. There’s some enormous western white pines – most of them alive, except for the occasional “ghost” of a tree that’s been hit by lightning.

A bit further on there’s a small plateauand another junction, this time a trail to Merced Lakes. Here I finally get a sense of the altitude gained, with filtered views of distant mountains through the towering trees.

The track ascends again, following the western side of the ridge towards the base of Clouds Rest. Looking down from the ridge, you start to get a view of the expanse of Yosemite stretching into the distance – and directly below a weird landscape that looks like millions of shattered pieces of granite piled haphazardly on top of one another. 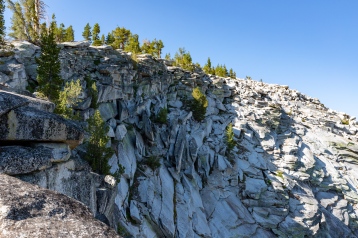 The of the first part of my journey is almost over, as I reach the base of the summit. There’s a metal sign which states “Clouds Rest Foot Trail”. I think it’s fairly obvious. But a small group just behind me misses the sign and start to walk along the base of the summit, and I later discover many people miss this junction. There is a path that goes around the base and up the back of Clouds Rest, but it’s a lot further.

There’s no path or signage from here – but none is needed. You just follow the narrow granite ridge up to the top. And I use the word “narrow” somewhat loosely: I’ve read descriptions such as “a narrow and knife-edged ridge”. I was expecting something a little exhilarating, like Angels Landing. Although you can make the ridge appear somewhat dramatic with the right camera angle, it’s not knife-edged and there’s absolutely no exposure. There are sweeping views as you ascend, but it’s not at all like many descriptions suggest.

At the Clouds Rest summit, a large open and rocky area, there’s a fair number of people enjoying lunch – although it’s not crowded. There expansive view over the partk, with Yosemite Valley stretching to the south as far as the eye can see.

The star attraction is Half Dome, rising above the valley floor.

To the east are some of the higher peaks – Mount Lyell, Mount Maclure and Mount Florence – some with patches of snow still clinging on to the upper slopes.

After taking a few photos and responding to a few urgent emails (it’s the first time I’ve had mobile reception since I arrived at the park), I continue down the southern end of Clouds Rest. There’s a clearly marked path down the rocky summit, which heads in the general direction of Half Dome. 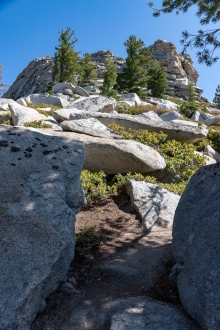 The path descends gradually through tall pine forest, soon meeting again wth the main trail that makes its way to Half Dome (my intended next destination) and then onto Yosemite Valley.

After a bit less than a mile of gradual descent, I reach a small spur that faces Half Dome on the other side of the valley. From here I can make out the cables going almost impossibly and vertically straight up the granite monolith.

The trail now descends via a series of switchbacks down to the valley; it’s getting warm and I’m glad to be going downhill (but less thrilled at the thought that eventually I will need to regain all of this altitude). Half Dome is a constant and unmistakeable beacon that dominates the skyline.

At the bottom of the valley is Sunrise Creek, and also the lowest elevation of the entire circuit I’m doing (around 2,195m or 7,200 feet above sea level). From here, it’s going to be uphill regardless of where I go… Since I don’t have a Half Dome permit and I’ve still got a long way back to the car, I give on my half-baked plan of combining Clouds Rest and Half Dome. (I was banking on the rangers being gone by late afternoon, and climbing Half Dome very late in the day). Instead, I cross Sunrise Creek, after re-filling my water bottles, and take the John Muir Trail back towards Sunrise Lakes.

The John Muir Trail initially follows Sunrise Creek and ascends very gently. I’m surprised how few people I see on the trail, which at times is almost hard to follow, considering it’s one of the more famous long-distance trails. Other than a thin strip of green along the creek, it’s also much drier than I expected. 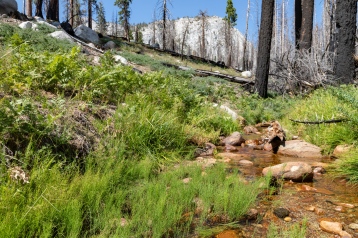 This was the least inspiring and hardest part of the walk… while never steep, it was a continuous uphill stretch with minimal shade, and big sections of burnt forest. 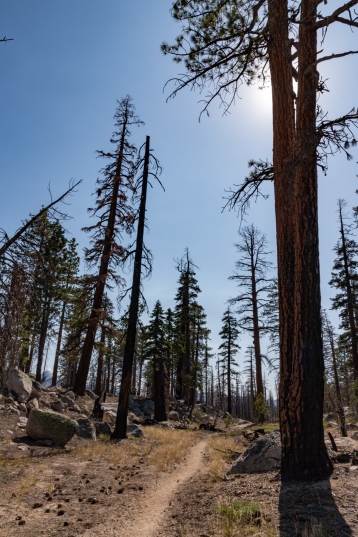 As the John Muir Trail gains altitude and crosses some broad meadows, the extent of the burnt area becomes more apparent. As I veer off the path to take some photos of the burnt out valley below, I encounter a friendly ranger who explains there was a huge bushfire in 2013 (Rim Fire) that affected large sections of the park. While the trees are normally fire-tolerant, they were killed by the intensity of the fire and it will take decades for the forest to recover. 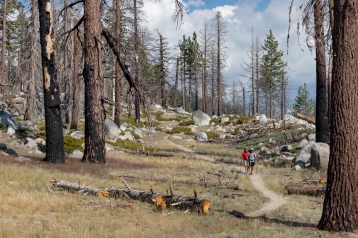 Eventually the trail reaches the base of Sunrise Mountain, where for a mercifully short distance it ascends very steeply via a series of switchbacks. Once it reaches the Sunrise Mountain plateau, it’s fairly flat, and for the first time there are views of the knife-like Matthes Crest and Cathedral Range (from left to right is Colombia Finger, Tresidder Peak, Cathedral Pass, the top of Echo Peaks, and Matthes Crest). 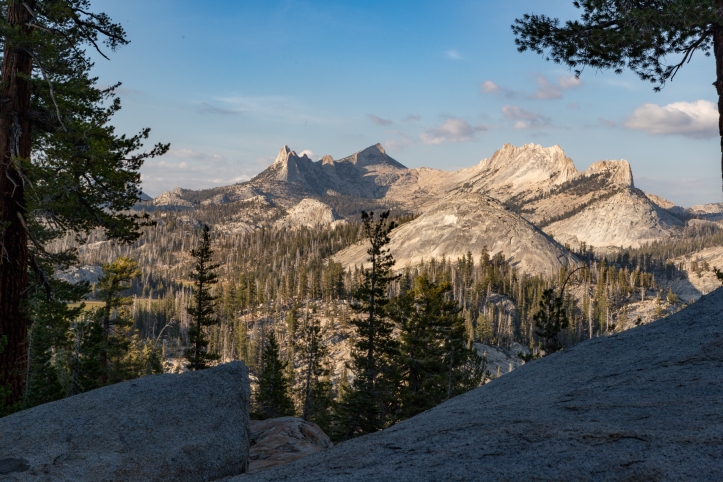 The track descends a little before rising again up to the Sunrise High Sierra Camp. Normally there would be seasonal accommodation here in large canvas tents, accessible only by foot and part of the High Sierra Camps. Due to an unusually heavy snowpack none of the camps were set-up this year. It’s a popular spot for campers, and there are a number of tents already set-up at around the edges of the enormous meadow.

I’m keen to get to Sunrise Lakes before dark, so I push on, leaving the John Muir Trail and taking the Sunrise Lakes Trail. (It’s a hard decision… it would have been a great spot for an extended break to see the changing colours of the distant peaks as the sun sets – but I’ve still got five miles to go.) The path climbs immedately, past a few camping sites and up one of the ridges that surround the grassy meadow. 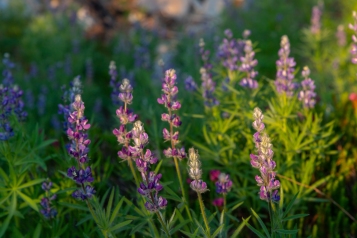 It’s about half an hour at a brisk pace to reach the first of the Sunrise Lakes – and I’m glad I kept going. The hill behind the first lake is almost glowing orange from the setting sun.

The track follows the edge of the lake, and after taking a few photos I continue to see what photo opportunities the next two lakes offer…

The sun has almost set as the track leaves the first lake, and descends towards the second lake. 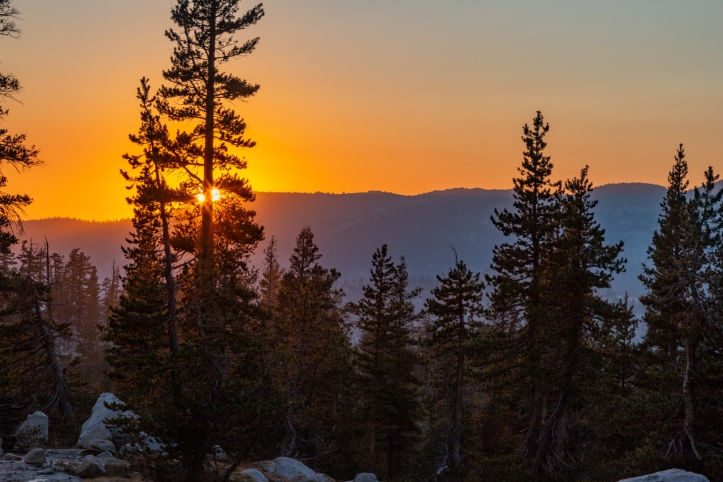 Lake number two is located a short distance below the track, so I make the short detour down to the edge of the water. It’s nice, but not as breathtaking as the first one. There’s one tent up neat the track, while the previous lake had a cluster of tents at the northern end.

After losing the track in the fading light, I eventually find it again and continue the short distance downhill to the third lake. The track skirts around the northern side of the lake, and it’s another great sunset vantage point.

I enjoy my last break of the day as the light fades and the sky darkens. With head-torch on, I’m soon back at the junction with the Clouds Rest Trail. There’s just 2.5 miles left to get back to the car at the Sunrise Lakes trailhead. 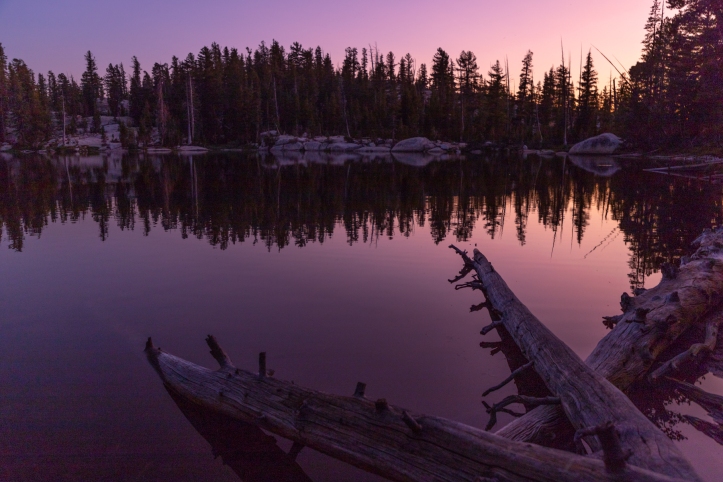 I’m back at the car at 10pm, having walked the last hour and a half in the dark. It’s been an exhausting walk, with Clouds Rest and Sunrise Lakes the highlights – and a few uninspiring sections between. I can see why Yosemite draws such big crowds and I’ve enjoyed my hike, but I’d avoid June-August in future and visit when there’s a few less people around!