One of the many routes through the Blue Labyrinth, the two-day walk from Faulconbridge to Glenbrook in the lower Blue Mountains combines tracks along Sassafras and Glenbrook Creeks with sweeping views from Lost World Lookout. It’s a varied walk with lots of potential camping sites.

A long weekend means an opportunity to dust off the backpack… I’m keen to try out one of the tracks that I’ve been researching as part of a guide to overnight hikes in the Sydney region. Joined by my daughter, I’ve picked a bushwalk in the lower Blue Mountains that should hopefully be not too busy on a holiday weekend. Starting at Faulconbridge, we plan to finish at either Glenbrook or Lapstone stations – depending on how much energy we have left on Day 2! 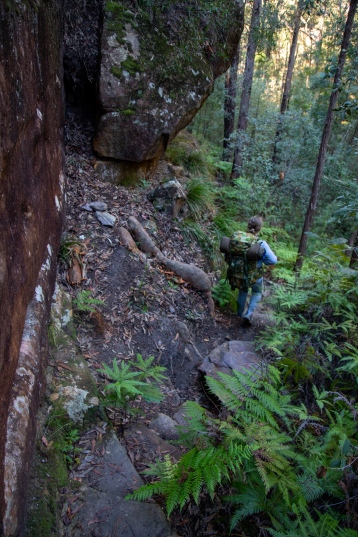 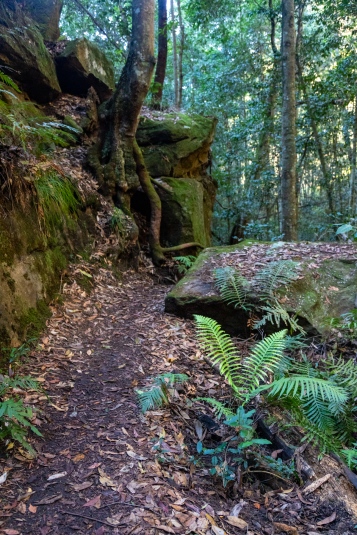 The track soon reaches Sassafras Creek and follows it down the valley. There’s not much water flowing in the creek. So Clarinda Falls, which we reach after about a kilometre, is not overly impressive. More of water-trickle than a waterfall. 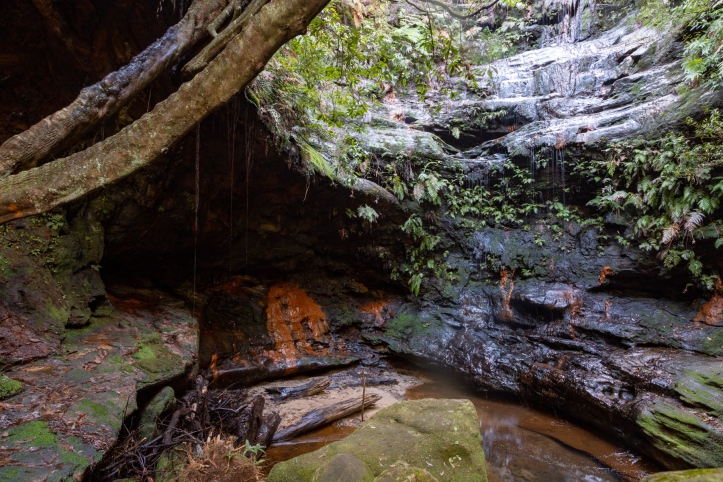 The narrow track continues along Sassafras Creek, with the occasional fallen tree breaking our relaxed pace. We spot a couple of lyrebirds foraging just off the track, which don’t seem to perturbed by us.

We encounter a few other people for the first time at the junction of Sassafras Creek and Glenbrook Creek. There’s a large swimming hole, and right next to it a campsite that would make a great overnight spot in summer (although the sign at the start of the track states “no camping”, there are many camping sites long the track). 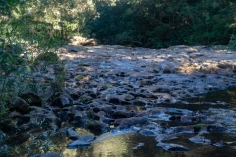 Our next stop is Perch Ponds, which is also the junction with the Magdala Gully Track that goes to Springwood. Leaving our packs at the informal camping area and track junction, we make a detour up the track to have a look at the falls.

Martins Falls would probably be impressive after rain – having had months of dry weather, there’s just a trickle falling into the pool of greyish water.

Further up the Magdala Gully Track is the Magdala Falls – we can hear the water from the track but you can’t really see the waterfall. Still, it’s a nice walk along the Magdala Creek – especially since we’re not carrying our backpacks! 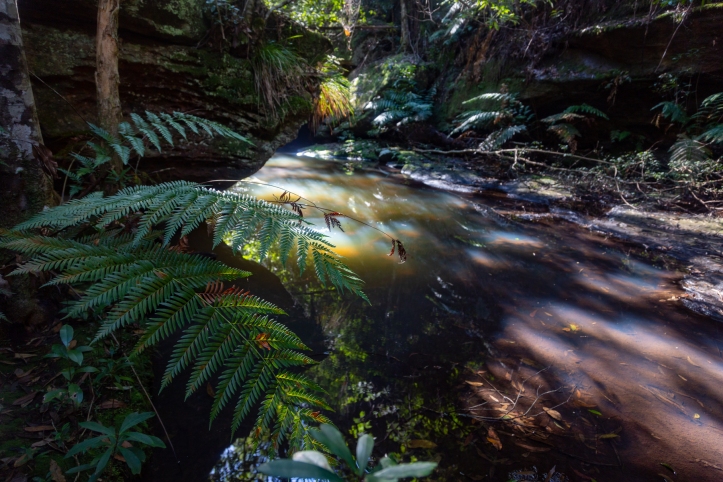 After returning to Perch Ponds and hoisting the packs back on, we continue down Glenbrook Creek until we reach the junction with the “King Link Route” up to Lost World Lookout. We can see the small white cross that marks Lost World Lookout from the creek below, high up on top of the sandstone cliffs. 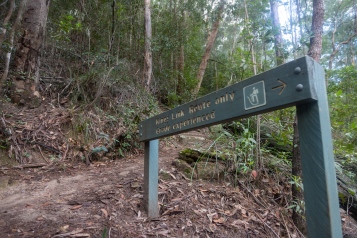 Amy is not thrilled about the steep climb out of the valley, which winds its way past sandstone overhangs and through cracks between large boulders. (I’ve done this section last year when walking from Martins Lookout to Lost World, so I find the track easily – it crosses Glenbrook Creek at MGA 756643 – and is initially marked by a few cairns, before becoming a more distinct track.) 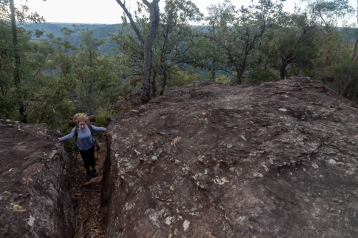 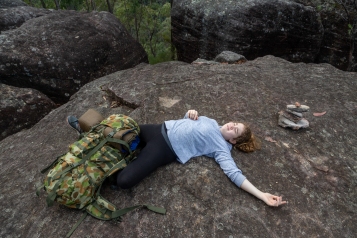 We finally reach Bunyan Lookout, at the top of the cliff-line, which was my intended destination for today. But there’s already a cluster of tents on the flat and sandy camping area – and part of the attraction of bush camping for me is to get away from people! So we continue down the track to Lost World Lookout. It’s easy walking along the ridge-top.  The hiking god/s are on out side: we arrive at Lost World Lookout to find a perfect camping spot close to the cliff – and no-else around.

After putting up the tent, we enjoy the solitude and the views. Being a fairly clear day, we can see all the way east to the Sydney skyline in the distance.

It’s been a very unrushed walk (unusual for me) and there’s plenty of time to enjoy a cup of tea (really should have brought some wine!) and watch the changing colours as the sun drops behind the surrounding hills. I’m expecting it to be bitterly cold, but with no wind I’m wearing just a light jumper and it feels warm. It is however, too cold and/or high for any mosquitoes. This is how camping is meant to be 🙂

An unexpected surprise is the sound of fireworks a few hours after sunset. I can hear the distinctive sound from far away, and peering in the distance I can just make out what must be the Vivid festival fireworks at Darling Harbour. Can’t say it’s the most impressive display from over 60km away – but at least there’s no crowds!

As I lie in my tent, I’m thinking it’s kind of cool to be sitting on the edge of a cliff face and looing at the city skyline in the distance… but as I hear the occasional drone of a motorbike audible from a distant ridge, it’s also a bit disconcerting that after almost six hours of walking we haven’t really managed to leave civilisation behind. (It would have been dead quiet in the valley below and in summer I’d have camped by Glenbrook Creek – but in winter it’s a bit damp and not so appealing to be by the water.)

The following day is glorious – the sun rises from the ridge directly opposite our tent and there’s no sign of the possible rain that was forecast. Amy helpfully wakes me up at 6am so I don’t miss the sunrise, and tells me I’m not allowed to crawl back into my sleeping bag for a nap. 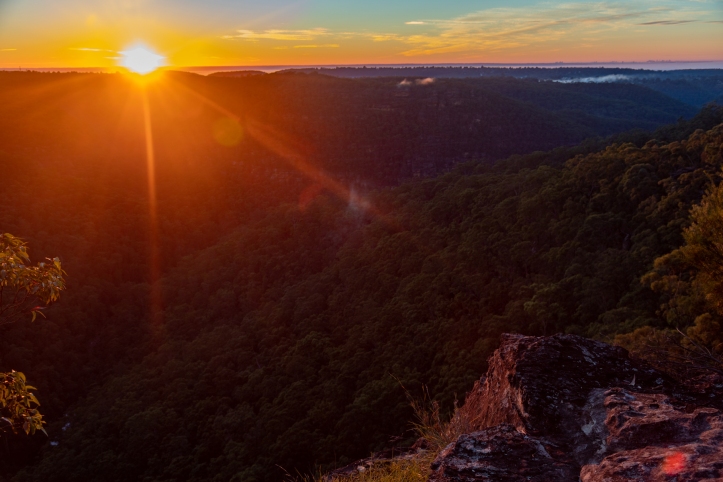 A final photo of the city skyline and the blanket of fog across western Sydney, and we’re on the way again.

It’s easy walking along the the narrow Bunyan Lookout Trail, which is almost completely flat as it follows the wide ridge-top. After 2km we reach the junction with the firetrail down to St Helena Crater. An extinct volcanic vent, the crater used to be a popular camping spot. It’s now completely overgrown with weeds: three massive containers of poison, now covered in weeds, stand as a sad testimony of failed efforts to restore the area to its former grandeur. It’s a shame as you can almost imagine a huge grassy area with towering gum trees providing shade. It reminded me a little of the Blue Gum Forest. 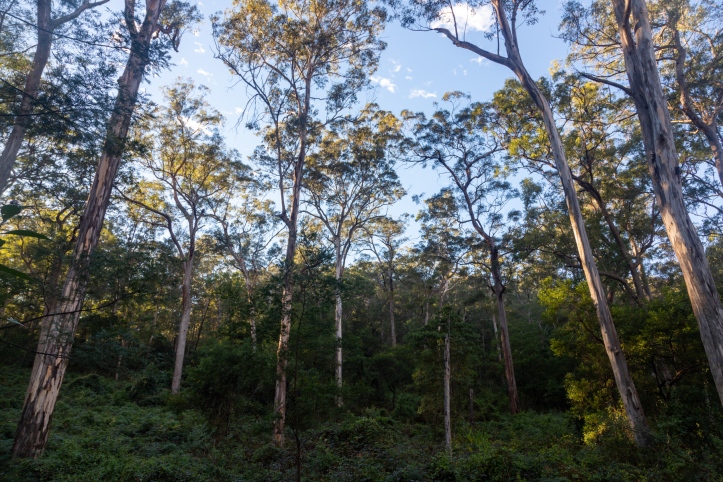 A nice swimming hole (at least on a warmer day!), Duck Hole was used in the 1880s to provide water for the steam locomotives (water was pumped up to the Glenbrook Lagoon). Last time I was here in January I enjoyed a swim here, shortly before losing my wallet and keys… today we continue back up the Duck Hole Walking Track to Glenbrook. (An alternative and slightly longer route would be to continue down Glenbrook Creek to the Jellybean Pool – which is slow going as the track is overgrown and almost non-existent.)

It’s a steep but quite short walk out of the valley up to Glenwood, finishing on Station St less than 500m from Glenbrook Station.

It’s been a great trip – I would have liked to continued further down Glenbrook Creek, but we were both happy to have an early finish. We’ve enjoyed a nice combination of rainforest walking along the creek, and easy walking along some of the ridges – and a fantastic and private camp site!