This is the only West Head walk I haven’t done yet (although there’s a couple I need to re-do as I didn’t take any photos) – I’ve left it until last as it just didn’t seem that enticing compared to the many other walks around West Head. I was proved very wrong – but you do need to venture a bit beyond the end of the firetrail, or it’s not worth doing this walk.

The track starts at a clearly marked gate about half-way along West Head Road. The sign states 2.1km one-way on the gate, my Ku-ring-gai Chase map has it as 2.5km one-way and according to my GPS it’s 2.2km – so allow about 90min (return). It’s easy walking along a wide fire trail. 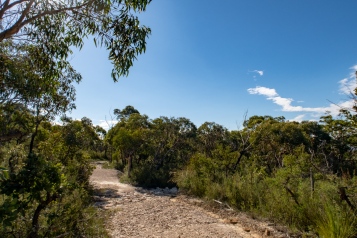 I’m surprised to see about five groups, including a number of families, on their way back on a Sunday afternoon. It’s not really a walk I would have picked if I had to choose the best walk to do – but the information sheet handed out at the entry booth doesn’t give any useful descriptions of the various walks. It’s easy and and not unpleasant walking as the tracks gently descends through open woodland. 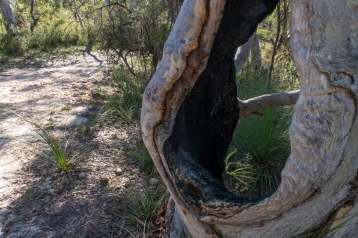 Although it’s not the right time of year for wildflowers, there are some banksia and bottlebrush in flower, as well as fragrant red and white boronia flowers.

By the time I reach the end of the firetrail, there’s no-one else around. The view from here is nice, but really not worth the 2.something kilometres to get here, compared to other tracks (Koolewong and Bairne tracks, for example).

But, since I’ve made the effort to come this far, I continue beyond the end of the official trail, down and to the left (west). I’m sharing the bush with a few spiders (the Australian Golden Orb Weaving Spider) – according to Australian Geographic they are quite tasty with a “plump abdomen that, after baking, tastes remarkably like pâté”. They also weave a very strong silk. The spider below ignored me as it feasted on a bee that it had caught in its web.

The short “bush bash” is worth it – not too far away is a huge overhang, from where there are views over Refuge Bay and Cowan Creek (or Cowan Water). I can hear a few people who have arrived after me, but they don’t venture past the end of the firetrail. 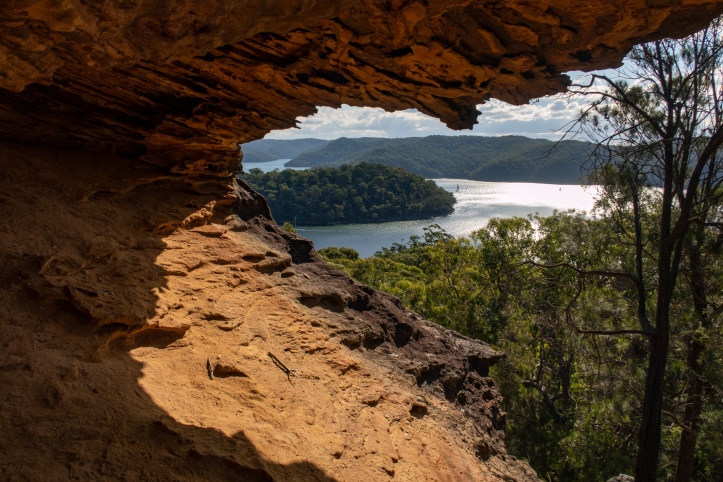 From the top of the sandstone overhang there are even more sweeping views, over Cowan Water and up towards Jerusalem Bay to the west and America Bay to the east.

It’s a great spot to relax and watch the many boats on the water, with only a short-ish walk back to the car. It’s a particularly pleasant surprise as I hadn’t expected much from this walk – but it has delivered one of the best viewing spots in West Head!