One of the shorter access routes to the Glow Worm Tunnel, passing through the spectacular pagoda-like rock formations on the way.

It’s been over three years since my last visit to the Glow Worm Tunnel, which I hiked with friends via the much longer track from Newnes after camping nearby. This time it’s a day-trip I’m leading with our local Cub pack, reaching the Glow Worm Tunnel via the shorter Old Coach Road and Pagoda Track. 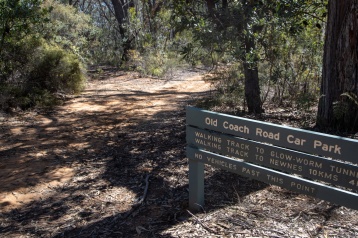 At the the car park on Old Coach Road, there’s a log book. It’s a good time to explain to the Cubs that map-reading skills are important to make sure you’re at the right starting point! As one of the entries shows, there is an alternate carpark at the end of Glow Worm Tunnel Road, which is even closer to the tunnel than our start point.

The walking track is the continuation of Old Coach Road, which is closed to traffic as is descends into the valley. There aren’t many flowers along the track even though it’s Spring – but the wattles are out in force! 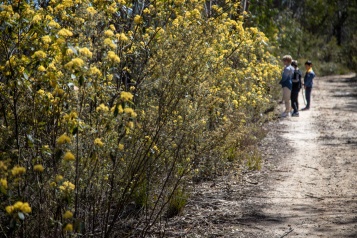 After less than 500m there’s views from the track of the surrounding  pagodas, and

A bit further on, and the pagodas are on both sides of the track, proving too much of a temptation for the Cubs! 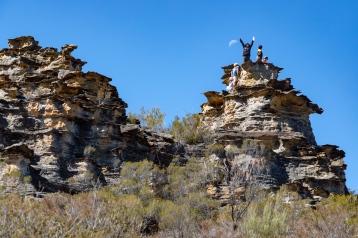 The pagodas are the result of vertical cracks forming in a very thick layer of sandstone, which break along these joints into roughly rectangular blocks. Water erodes the rock more quickly than in the centre of the sandstone blocks, so the top of each block becomes a dome shape. Differences in the texture of the sandstone causes some layers to wear more quickly than others, generating the terraced appearance of the domes.

It’s pretty impressive from above too…

We finally drag the Cubs away from their Pagoda rock-climbing and continue down Old Coach Road. The road continues descending, passing a gate as it nears the bottom of the valley.

Just after the gate, Old Coach Road joins the Pagoda Track, a narrower bush track. There’s a few huge caves and overhangs, and a hollowed-out tree that provides some more distractions for the Cubs as we descend the last section of track to the bottom of the valley. After about one kilometre the Pagoda Track meets the shorter track that leads from the carpark at the end of Glow Worm Tunnel Road, which is the shortest route to the tunnel. 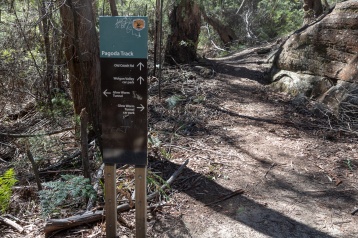 The landscape changes along the valley floor, with towering eucalypts, ferns and patches or rainforest as we neat the tunnel entrance. 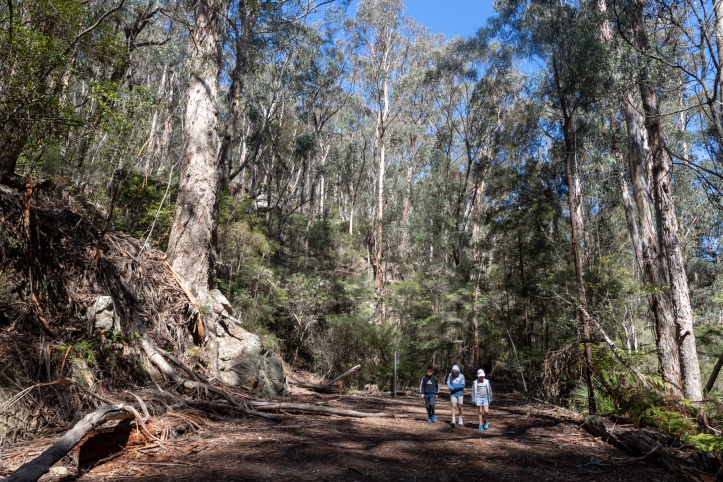 Finally we arrive at the Glow Worm Tunnel entrance, half-hidden by ferns, and put on our head-torches for the last part of our walk through the tunnel.

We all see the glow-worms once our torches are off, and our eyes adjust to the dark. The tunnel is quite busy today – and the Cubs were much more impressed with climbing the rock pagodas on the way down than the tunnel itself!

We make our way back the same way, for a late BBQ lunch at the car park. The tunnel itself was much busier than my last visit, with most people accessing it via the Glow Worm Tunnel car park (1km), rather then the 3km route from the carpark at Old Coach Route. It’s also disappointing to see quite a few people behaving like dickheads – bringing their dog (which is prohibited in national parks, and clearly stated on the signs) and one person even smoking a cigarette as they walked through the tunnel. If you can, visit during the week or get here early.