A very steep and sometimes muddy path to the 448m peak of Reinebringen rewards with awe-inspiring views.

The walks starts near the southern end of the E10 tunnel near the turn-off to the town of Reine, in the Lofoten Islands. We (me and my 8-year old son) are dropped off here – if you are parking the carpark is at the other end of the tunnel, near the Reine turn-off.

The start of the the walk is marked with a big arrow, and follows the coastline for a few hundred metres, rising gradually through birch forest. It creates a slightly false sense of confidence that this might be an easy walk.

It very soon gets very muddy. And very steep. There are a some slippery slabs of rock that require careful negotiation.

As you climb, the view toward the south-east, with the E10 following closely following the coast starts giving you a sense of the vistas ahead. (After about 400m a new stone path is being constructed that should make the ascent a much less muddy proposition.) For now the “old” path continues to the right, climbing steeply up the south slope of Reinebringen. 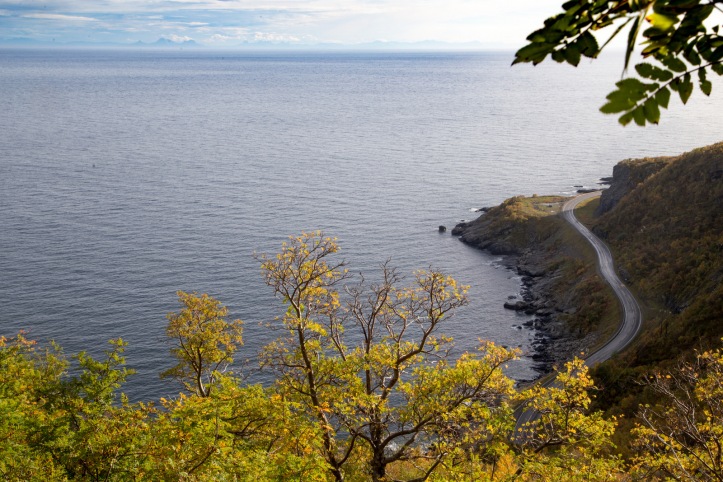 The path gets gradually steeper, if that’s possible, as it nears the saddle just below the peak. We’re partly walking and partly climbing the track as it zig-zags through grass, loose scree and a few muddy sections. 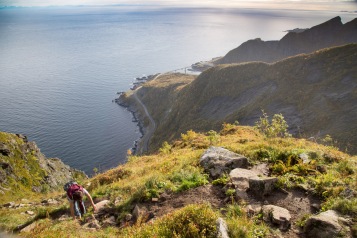 A last scramble and we reach the summit of Reinebringen.

The view from Reinebringen is breathtaking! Reine is directly below, and there are mountain peaks as far as the eye can see.

To the left, a trail continues further up the ridge, and another 200m ascent is possible (if you don’t suffer from vertigo!).

Directly below us we can clearly see our cabin in Reine, in the typical “red and white” Norwegian style of fishing huts.

I could stay here and admire the views for hours, with a handful of other hikers who are on the rocky peak. But after a few minutes my son declares “The view’s OK. Can we go back now” and we start our descent.

It’s just as tricky and slow going down the steep path. I take it slowly and carefully. My son swings on the trees and slides down the mud as if we are at some sort of Norwegian amusement park made of mud!

We walk back into Reine around at 5pm, muddy and tired, but our spirits uplifted by the walk and the view.