Fun morning hike looking for fossils at the foot of the Longyearbreen glacier, to the south of Longyearben.

Determined to make the most of our five days in Svalbard, I booked this fossil hunting expedition with the kids towards the end of our stay.

We set-off from the end of the road (Vei 100) at the top of Longyearben town, led by our excellent guide Fridrik from Svalbard Adventure Group. Our first challenge: getting across the Longyearelva (Longyear River), which is is fed by the Longyearbreen and Larsbreen glaciers.

Having accomplished that task, we continue up the Longyear valley, passing the remains of some of the first mining sites. (A key industry in Svalbard since Norway won sovereignty over the archipelago in 1925, coal mining still takes place but the government is looking at ceasing operations in the one remaining mine.) 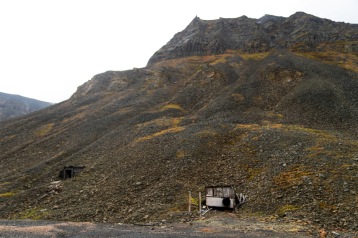 After following an old mining road for a short distance, the track gets steeper as it climbs up through the moraine, with views of Longyearben town below. Nearing the foot of the glacier Longyearbreen (around 78.19181, 15.53111), we stop to admire the views, enjoy a hot chocolate (the kids give Fridrik’s hot chocolate five stars) and fill in the log book. 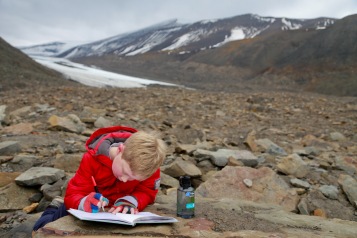 Now comes the fun part of looking for fossils… Fridrik shows us where to look, and explains that the fossils in this area are 40-60 million years old, and are plant rather than animal fossils. With some vigorous use of the fossicking hammer, we quickly find some great specimens to take back with us! 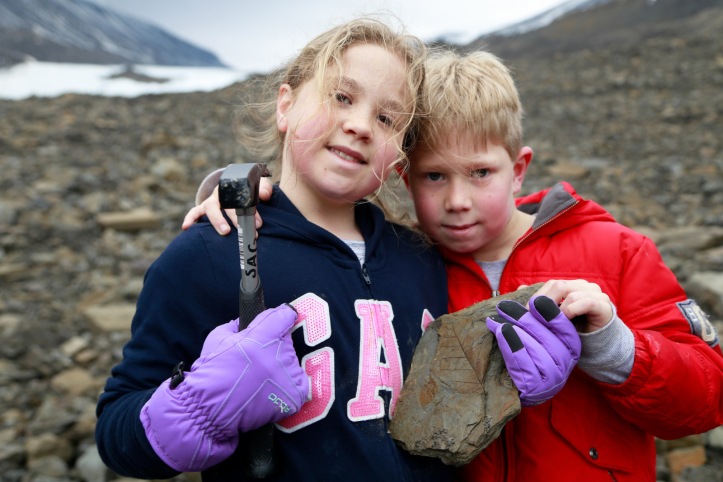 The weather is deteriorating a little, so we head back down – we could have continued another 100m or so to the foot of the  Longyearbreen glacier. We head back down, taking a slightly different path. Fridrik goes well beyond the call of duty, carrying and swinging the kids across the river at the bottom: they somehow manage to finish with mostly dry shoes and claim this is the best walk ever! 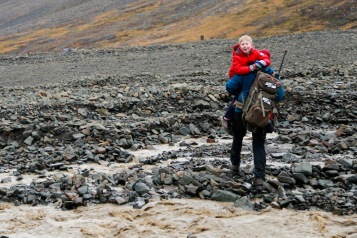 It’s overcast but not raining, so having reached the road and our starting point we decide to walk back to our accommodation (the Svalbard Hotell). We make a slight detour via the Svalbard cemetery, which was established in 1918 when eleven people were killed by the Spanish flu. Two years later, 26 men were killed in a coal dust explosion in Mine 1.

The cemetery hasn’t been used since  the 1940s, and in fact it’s now illegal to die in Svalbard. It was discovered that the bodies buried in Longyearbyen were perfectly preserved by permafrost – and that bodies never decompose. Scientists were able to extract tissue from some of the bodies buried here that contained intact traces of the influenza virus, in an attempt to learn why the 1918 flu was so virulent and prevent any occurrence in future. This is documented in a fascinating book “Hunting the 1918 Flu” by Kirsty Duncan.

It’a sobering thought that we may be standing a few metres above one of the world’s most deadly viruses!