Turtlehead Peak is a short but strenuous climb to a peak with great views of Las Vegas valley, that’s considered a “must do” peak for local hikers.

After my “accidental” morning hike to Blue Diamond Overlook, I arrive at Turtlehead Peak around 10am. This is the hike I’d intended to undertake today – a supposedly tough but rewarding climb to one of the higher peaks in Red Rock Canyon. The trail starts at Sandstone Quarry (2.9 miles past the entry station), with the distinctive Turtlehead peak directly ahead. 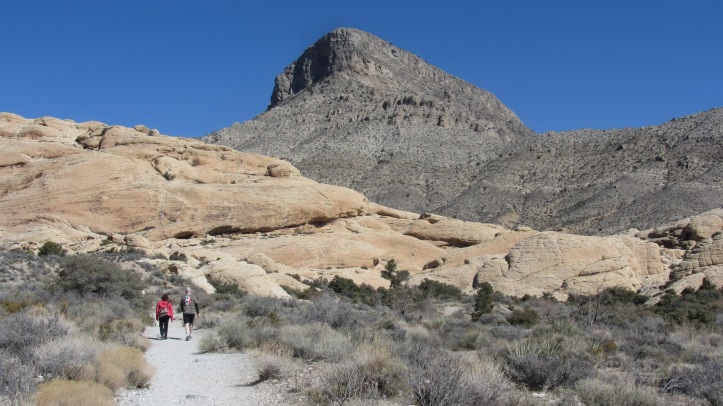 The trail crosses a band of sandstone, and is initially the same route as the one to Calico Tanks, before the two trails split. The Turtlehead Peak Trail heads directly toward a saddle below the summit. There was minimal signage at the time and the route up the chute was more a “choose your own adventure”: now there’s more frequent trail markers as well as green blazes on the rocks. 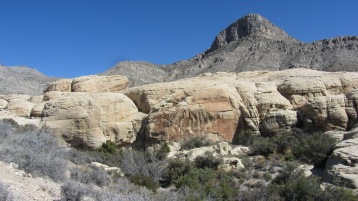 From the ridge leading up the summit, you start getting great views over Red Rock Canyon and the Spring Mountain Range.

From the summit there are sweeping 360-degree views. To the north-west are the La Madre Mountains. Far off in the distance is Mt Charleston (the highest mountain in Nevada), which stills has some snow around the summit.

To the south-east is the sprawling city of Las Vegas.

And looking south-west, beyond the Sandstone Bluffs (in the foreground), is the Spring Mountain Range. Some of the more prominent peaks (from the left in the photo below) are Mount Wilson, Rainbow Mountain, Bridge Mountain (with its distinctive band of darker rock, near the middle) and then the White Rock Hills to the right.

It’s back the same way after admiring the views. It takes me in total about two and a half hours. Definitely a hike worth making the effort for!