An overnight guided hike to the summit of Mount Kinabalu (4,095m), the highest peak in Borneo’s Crocker Range and the highest mountain in Malaysia. Ascent via the Timpohon Trail and descent via the Lows Peak Via Ferrata.

This is my second attempt at Kinabalu – on the my first trip (in June 2011) I think I made the summit as I got a nice certificate – but I can’t remember much. It was pouring with rain all the way up from Laban Rata. Rivers were flowing over the rock and there was zero visibility. I was more concerned with avoiding hypothermia than trying to admire what little views there were…

So, less than a year later I’m back, determined to get to the summit AND have some nice photos to share. I’ve booked my guide, and taken the via ferrata option for the descent. This time I’m doing the hike in February, which is the “dry season” (February & March being the best months, while May to October is considered the wet season). It’s misty and drizzling as we set-off up the track from Timpohon Gate – although I’m not too concerned as there are few completely dry days in this area!

The well-formed track climbs relentlessly, with distance markers every kilometre and frequent shelters, where the guides generally insist on a short break. At some of these you’ll see mountain squirrels (Sundasciurus tenuis), a species of rodent found in Indonesia, Singapore, Malaysia, and Thailand.

Did I mention the climb was relentless… Relentless, but never really steep or tough, and unlike other Malaysian hikes due to the altitude it’s fairly cool. For the last couple of kilometres the track gets rockier and can get a bit slippery when wet.

We reach Laban Rata around midday, having taken about three hours to cover the first six kilometres. Here there are a cluster of huts where you stay the night before the final climb, and a restaurant serving hot food. I’m staying in the Pendant Hut, which is used for people undertaking the via ferrata on the following day. The huts are unheated, and while bedding is provided I was pretty cold during the (short) night. Short because around 2am everyone is up and on the trail, to catch the sunrise and hopefully a clear view before the clouds roll in… If you are reasonably fit, you may want to ask your guide for a later start – this is what I did (we left at 3am) as there’s nothing worse than shivering in the cold for an hour on the peak waiting for the sun to rise!

The last section is only 2.7km, but there are some steep sections and the effects of hiking at high(er) altitudes… so it is a bit slower going. There’s also a long line of hikers as everyone starts around the same time, and passing people can be tricky on some sections. (While I’m glad to have done this walk, it does feel a bit “touristy” – I much preferred the tougher Mount Trusmadi climb I did a few years later, where you’ll probably have the summit to yourself!) I reach Lows Peak, the 4,095.2m summit of Mount Kinabalu at 6am, just before sunrise.

There are many people already on the peak – and many people still making their way up the rocky “track” (more of a route marked by a rope toward the end).  Looking back down the way we’ve come from is St John’s Peak (the second-highest at 4,090m). Some say in certain lighting conditions you can see the face of an ape on St Johns Peak.

There’s great views from the peak in all directions: to the north is the 1,800m deep and 16km long Low’s Gully, long considered to be inaccessible. Named after Hugh Low, it was formed over a million years ago when a massive glacier carved the deep canyon.

To the south-east is the Ugly Sisters Peak (4,032m), another of the unusual rock formations created by glacial activity.

It’s pretty cold on the summit, and after taking some photos we head back down, initially taking the same route as we came up. The route across the rocky terrain, marked by a rope, is now clearly visible – to the right (bottom left) is St John’s Peak.

To the left is Donkey Ears Peak (4.054m), a twin peak landmark that resembles a pair of donkey’s ears [they were damaged in the 2015 earthquake few years later].

To the right (west) is Alexandra Peak, Oyayubi Iwu Peak & the Dewali Pinnacles, with the coastline and Gaya Island visible in the distance.

After walking a short distance, and with Laban Rata now visible below, my guide prepares the ropes and we helmet-up for the descent to Laban Rata along the Lows Peak Circuit via ferrata. At a starting point of 3,776m above sea level, it’s the highest via ferrata in the world!

It’s also a much quicker way to get down, with the route descending directly down the rock face, using steel rings bolted into the rock face.

After the initial almost vertical section, the route follows the bottom of the cliff face, as it heads south-east towards Laban Rata.

One of the “features” of the via ferrata route is the highest suspension bridge in the world, which spans a short crevice in the cliff-line.

There’s a final section along the bottom of the cliffs before we re-join the main trail just before Laban Ratan, as the weather starts to close in. It’s taken ùs just over two hours to get back to Laban Rata, which is a pretty good pace – it would take a bit longer in a bigger group.

After a lunch stop at Laban Rata, we continue down the Timpohon Trail. My guide points out a pitcher plant – Kinabalu is the richest place in the world for these carnivorous  plants.

It’s also sobering to see porters walking cheerfully up (and down) the mountain with massive loads on their back – everything has to be carried by hand to Laban Rata!

It takes almost as long to descend the 6km back to Timpohon Gate as it does to walk up – and my legs are very painful by the time I’ve finished. I’d even suggest the descent is harder than the ascent: my legs are like jelly at the bottom from the thousands of steps!

A big thanks to my guide, Ohayou, who was awesome! You need a guide and permit for Mount Kinabalu; I arranged everything through Fly Travel (Sabah), but many other companies like AmazingBorrneo or Borneo Calling can organise transport from Kota Kinalua as well as permits and a guide. 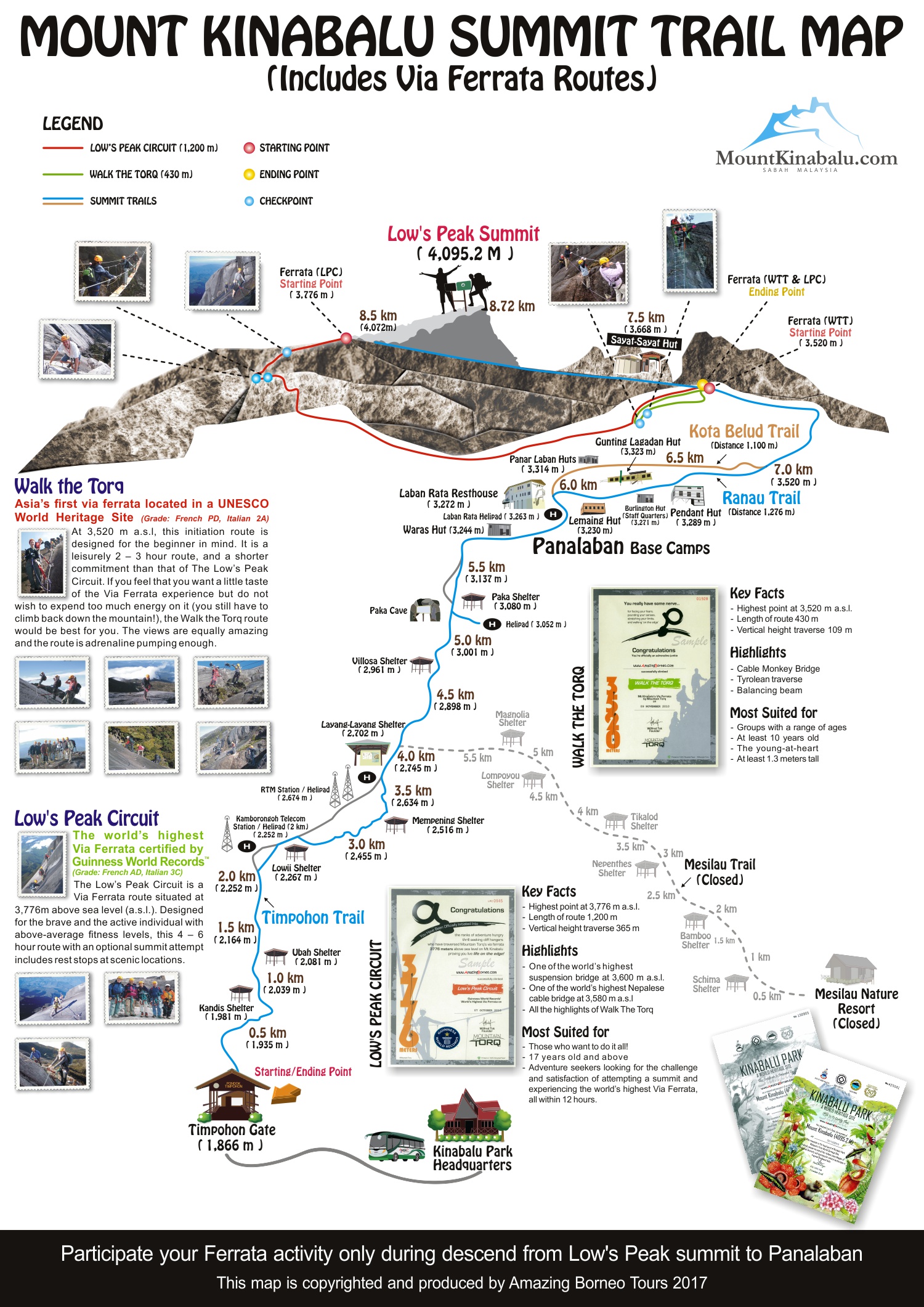