There’s a couple of routes to Mount Gingera (1,857m), which is located in the Bindabella Range and is the second highest peak in the ACT. The more challenging route is from Corin Dam, which involves a steep ascent up to and along Stockyard Spur.

It’s been almost a year since my last ACT hike, and I’ve had the Mount Gingera hike on my list for a while. (I was hoping to do it winter when the mountains are covered in snow, but left it a bit late this year to find a spare half-day. But I’m hoping there might still be a bit of snow on the peak!). It’s an early start as I need to be back in Canberra for afternoon meetings and my flight back to Sydney. So I’m at at the start of the track, at the Corin Dam carpark, just before 7am.

The track starts ascending quite steeply from the carpark; after about 200m there’s a bench with views over Corin Dam. The dam looks pretty empty – a Google search the following day tells me it’s at only 19.2% capacity (the lowest of all the ACT dams). 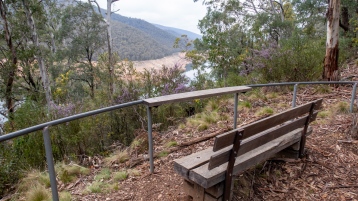 Shortly after the lookout, a sign warns of the steep ascent. For the next two kilometres, the trail climbs steeply and unrelentingly through the forest up to Stockyard Spur.

It wouldn’t be much fun on a hot day, but on a cool Spring morning it’s actually not too bad. It takes me just under an hour to reach the top of the steep section, a 580m ascent, and the start of Stockyard Spur. 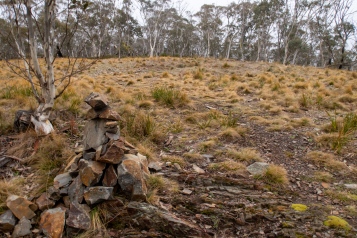 After crossing a grassy plain, the narrow track meets a wider service management trail which follows Stockyard Spur for about 4km. It’s easy and very pleasant walking along the wide trail, through sub-alpine snow-gum forest. The track continues to ascend, but it’s quite gradual.

As well as snow gums, the trail is lined with wattles (I think Acacia obliquinervia or Mountain Hickory Wattle) which flower from August to December.

As I continue along the Stockyard Spur, the mist clears and the sky turns to blue – perfect hiking weather! 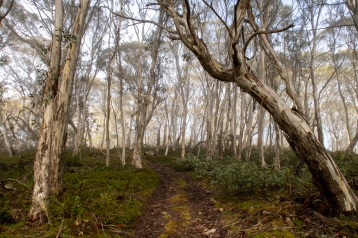 A few kilometres along Stockyard Spur there’s a small rock outcrop, with views for the first time over Little Ginini Mountain and the cloud-covered Bimberi Range in the distance.

There’s a few patches of snow along the trail  – but definitely no need for snow shoes! (I’d read blogs that warned there could be up to half a metre of snow in September, but it’s been pretty warm for the last couple of weeks). 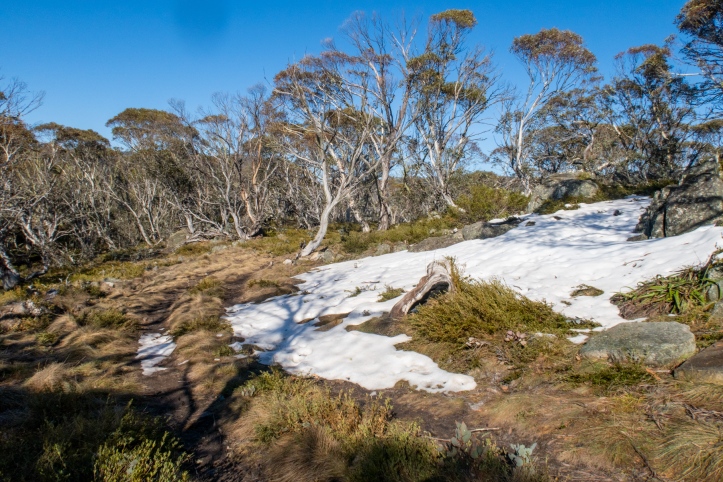 After about 4km along Stockyard Spur, the trail meets Mt Franklin Road, a service management trail. For an easier route to the Mt Gingera summit, you could start at the Mt Ginini carpark and just follow Mt Franklin Road (shorter and also avoids the steep climb up to the ridge). This section is a bit dreary – although closed to traffic you’re basically walking along a 4WD track. On the way back I even encounter Parks staff driving along in a 4WD ute along the track.

After one kilometre I stop to have a look at Pryors Hut, located just of the track (CMA Corin Dam 610630). Named after Professor Lyndsay Pryor, a Superintendent of Parks and Gardens, the historic hut was built in 1952 as a shelter for those planting and tending alpine plants as part of a project for the National Botanical Garden. 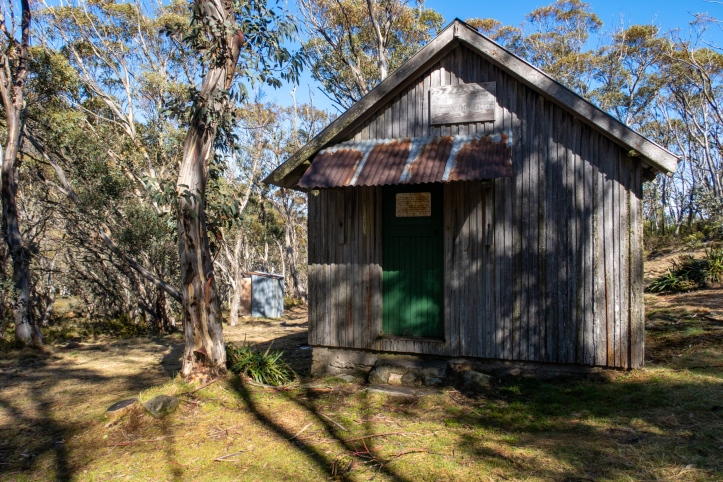 It is now used as an emergency shelter, with a fireplace inside and a couple of rooms. 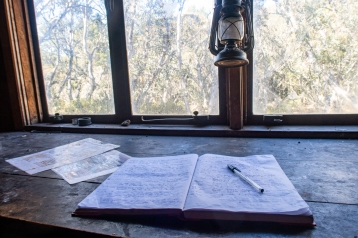 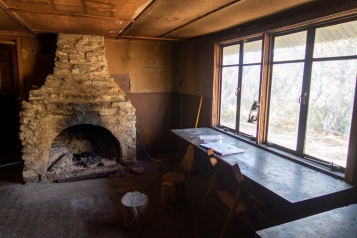 From here it’s only another kilometre to the start of the track up to Mount Gingera. It’s marked by an arrow cut into a post, at the middle of a hairpin bend – but it’s not otherwise marked. So keep an eye for the faint trail or keep an eye on your topographical map to make sure you don’t walk too far. 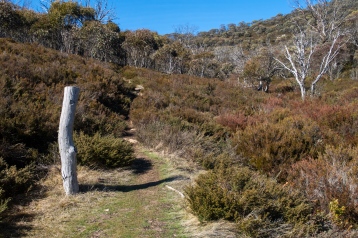 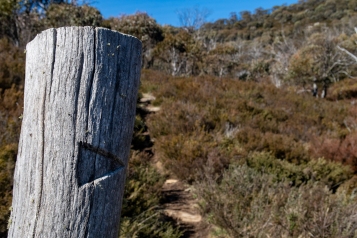 The last section is uphill again, not surprisingly! But it’s fairly easy walking on the narrow and sometimes overgrown trail that heads up to the peak. It would probably be a bit tricky to stay on the trail in winter, but with only the odd patch of snow left it’s almost impossible to lose the trail.

The summit is more like a plateau than a peak… there’s a jumble of oversized boulders from which there are 360-degree views over Namadgi National Park, the Bimberi Wilderness and Kosciuszko National Park.

I pick the biggest, or rather highest, boulder that hopefully represents the summit! To the south is Namadgi National Park. 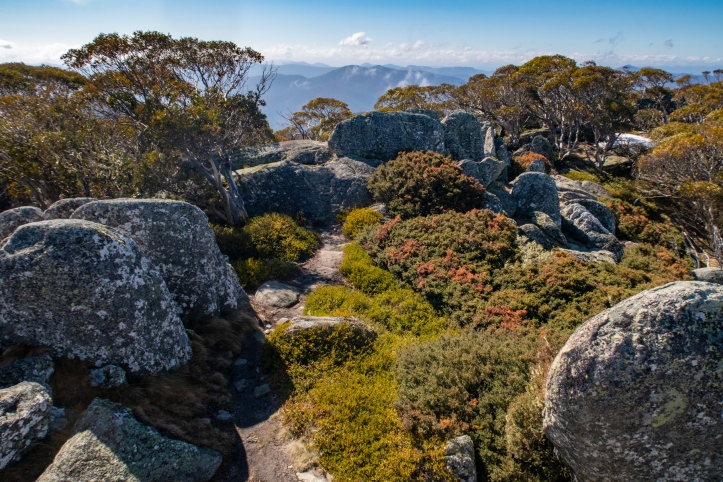 To the west is NSW, and the Bogong Peaks Wilderness.

Walking back down the track to Mt Franklin Road, there’s views of Namadgi National Park and the Tidbinbilla Range in the distance. 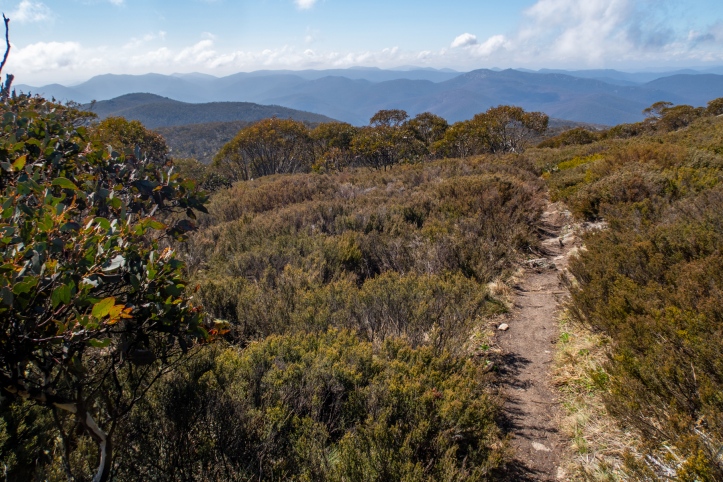 I’m soon back at Mt Franklin Road (you can see below the hairpin bend) and heading back the same way back to the car, finishing the walk around 1:30pm. 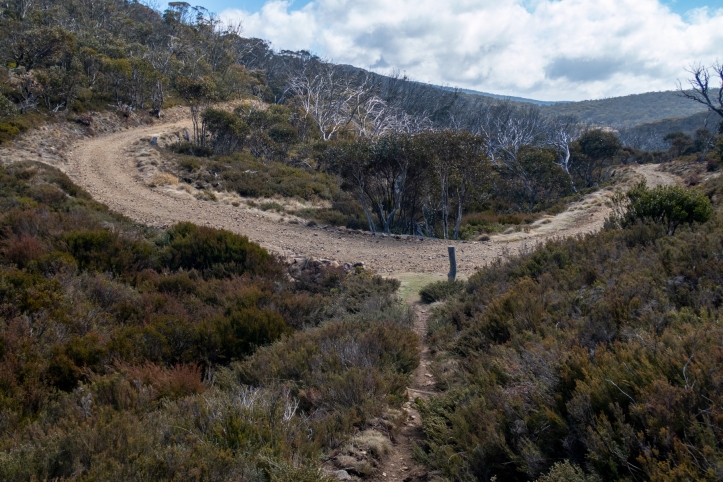 Definitely a bushwalk I’d recommend: other than the fairly short section along Mt Franklin Road, which is not particularly pleasant, it’s great walking through snow gum forest. The views from the Mount Gingera summit are spectacular, and have been described as “one of the best views you can get from a day walk in the ACT”.