Mt Maculot is one the of the most popular (and arguably the most scenic) mountain in the Batangas south of Manila, in the Philippines. The reward for a steep and tough climb is a spectacular view over Taal Lake and its volcanic island.

Having only 48 hours in the Philippines on a very short work trip, I need to find a hike that I can get to early in the morning that’s within easy reach of Manila… A Google search suggests Mt Maculot ticks a few boxes: great views, a couple of hours from Manila and reasonably challenging! Next step is to find a guide… I’m not confident in my ability to get myself from the hotel to the hike at 3am using public transport, and to then find the correct starting point! My Malaysian hiking guide, Eddie Yap, happens to know a few people in the Philippines who might be able to help, and connects me to Charlie, Dabid and Jaybie. A few Facebook chats later, and my new Filipino friends come to the rescue and offer to organise a guide and join me on the hike.

Having been picked up in Manila at 3am, we’re quickly on the way south to Mt Maculot. Arriving at a nearby town where we meet our local guide, Jaybie suggests we have breakfast. The Batangas is renowned for lomi – a dish made with a variety of thick fresh egg noodles with small pieces of meat in a thick glutinous liquid. It’s definitely not something I would have tried on my own. But I’m told it’s very good. And having tried it, it tastes great – it’s a lot better-tasting than it looks, and I wish I’d ordered the larger bowl!! 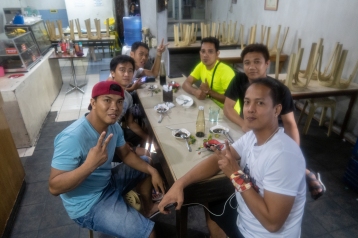 From here it’s a short drive led by our local guide to the village of Cuenca, where we commence our hike. It’s still pitch black and quite cool as we head up the road, which soon turns into a narrow trail. It’s not overly steep but ascends unrelentingly up the mountain, with 1,000 steps passing by 14 “stations”: each station represents the passion of the Christ or a final period in the life of Jesus leading to his crucifixion on Mount Calvary. At about 5:30am we reach the Lady of Lourdes grotto (510m asl) – or just The Grotto – where we stop for a while and wait for the sun to rise. The Mt Maculot summit is visible beyond the two crosses, and doesn’t look too far away. 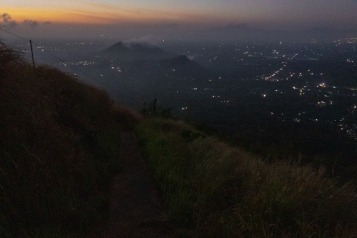 To the south there’s a view over the Batangas, with a sea of lights twinkling as far as the eye can see.

With the sun not quite up, we decide to continue. The next section is tougher than I expected, with the rough trail climbing just over 200m to the top of the summit ridge. It’s basically either steep, or very steep, with a few sections assisted by ropes to help climb up the slippery rocks. I’m normally fairly quick, but the team I’m hiking with are all fitter than me and soon leave me in their wake!

We stop and regroup a couple of times on the way up. While the sun is now up, there’s a few drops of rain which seems to be Mt Maculot creating its own micro-climate.

As we near the summit there’s a glimpse of clear sky (which is uplifting after the mist and drops of rain on the way up through the rainforest), before we reach the peak. 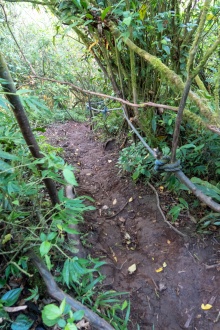 The Mt Maculot summit, at 930m above sea level, was formed by the explosion of the Taal volcano millions of years ago and is part of the caldera rim of the former Taal Cone. 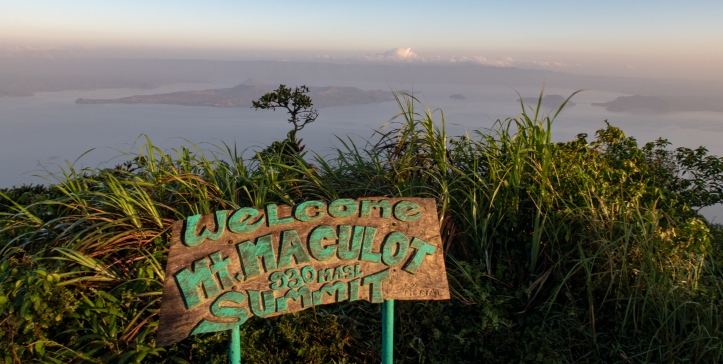 There are panoramic views from the cleared summit area over Taal Lake, with Labangan Bay to the south-east (left) and Taal Volcano Island directly ahead.

To the north is the prominent peak of Mount Makiling (aka Mount Maquiling) at 1,090m, a dormant volcano.

After admiring the views from the summit, we head down to The Rockies, another one of the attractions and vantage points of this hike. It’s another steep and rough track – but this time we’re going downill, so we make quick progress. 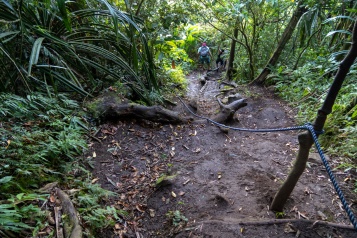 After descending down the side of the summit ridge, the trail reaches a flat and more open area. Behind us we can see the Mt Maculot summit.

We stop for a break at the site of a sari-sari (convenience) store, which on weekends sells drinks and a range of snack foods. Today, there is no-one but us reesting under the large, covered seating area. Nearby is the Mt Maculot campground, which today is also deserted. From here there’s last drop into a small gully and then a scramble up the other side onto The Rockies.

The panoramic view from this long, thin and rocky ridge is even more spectacular than from the summit, stretching from the Mt Maculot summit behind us to the wide expanse of the Taal Lake.

From the south (left) side of The Rockies you can see Labangan Bay and the cliffs along the southern end of Lake Taal. 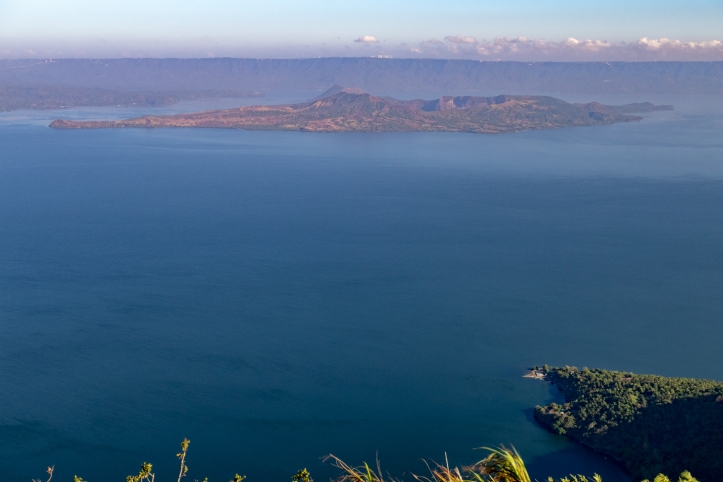 We spend half an hour here: there’s no-one else when we get here, but by the time we leave a few other groups have arrived. It’s not too busy compared to weekends, when (judging from some of the photos I’ve seen) it gets very crowded.

We take an alternate route down the mountain, which passes by the only sari-sari store that’s open for business today. As well as various snacks, the store has fresh and icy cold coconut water, which is perfect as the day starting to get hot. (I now understand why it’s recommended you start this walk before dawn!)

The trail down is again fairly steep, but seems drier on this side of the mountain then the trail up. It would be much harder after rain on a muddy track, even with the occasional help of a fixed rope.

I take advantage of a last photo opportunity of Lake Taal from one of the (empty) sari-sari stores on the way down, before we enter the forest.

There’a few of these mountain convenience shops on the way down, although none of them are open today. I suspect it must be a very different experience on the weekend, with crowds of people making their way up the narrow trails.

Finally the trail meets the road, which we follow back to the starting point. Behind us is the Mt Maculot summit. 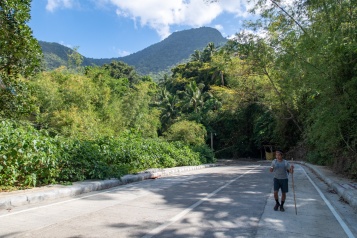 Looking at my map there’s still another 2km or so to walk, so I’m happy when my new friends suggest I really should try a motorized tricycle. A popular means of transport in small towns and cities, they consist of a sidecar affixed (by a combination of rope and some welded metal bits) to a motorcycle. I try not to think too hard about the It’s much quicker than walking – and the first time I’ve caught a motorized tricycle to complete a hike!!

I’ve really enjoyed the hike – the views are more spectacular than the photos depict, even though the sky is a bit hazy. Now there’s just the drive back to Manila, which takes a bit longer due to traffic. And one last lunch stop along the way so I can try bulalo, a Filipino soup made with beef shank and vegetables, and a famous local dish in Tagaytay.