Bulcamatta Falls Track is a short and shaded walk from the Burralow Creek camping ground, to a small grotto and waterfall.

A last minute decision to go camping on a rather damp long weekend sees us arriving at Burralow Creek camping ground on Saturday afternoon. We’re hoping the recent rain might mean it’s not too crowded… the reality is that while there’s still a few spots left in the large, grassy area, it’s pretty busy. I guess being less than two hours from Sydney, it’s going to be busy on any long weekend, even in the middle of winter. It’s a good lesson: don’t leave home on a long weekend!

We find a spot that’s not too close to anyone, and set-up camp. We’ll come back here on a “normal” weekend, as it’s a very nice campground – and even on a winter weekend the weather is pretty mild (a degree or two colder than Sydney). 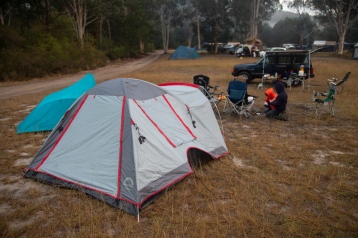 On the following day, after a leisurely start (the kids cook us bacon & egg rolls), we set out to find the “short walk to a waterfall”. The start of the walk is not marked, but is fairly easy to find. on the western side of the camping ground. Shortly after the metal gate at the start, the track crosses the creek on a dubious “bridge” of logs. Here there is a sign.

The track is very flat – it’s easy walking – as it follows the alluvial flats through tall forest, not far from Burralow Creek. After about 500m there’s a pit constructed from sandstone blocks that’s part of an old settlement. Early settlers thought the swampy area would be suitable for irrigated agriculture: Burralow Creek camping ground is the site of the first rice farm in Australia!  A short side track leads to an impressive termite mound, and a little further there’s a a natural stone grotto and a natural stone grotto.

The track then follows a smaller side-creek through sections of fern and  increasingly moist vegetation. 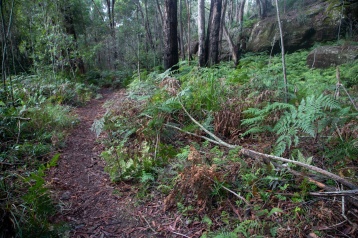 After about 1.5km a narrow and shaded gorge is reached, in an area of temperate rainforest (coachwood, sassafras, cedar wattle and umbrella ferns). 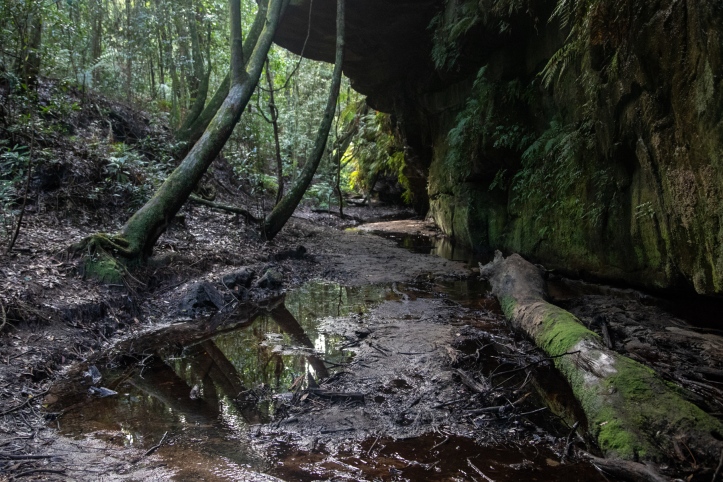 At the head of the grotto and surrounded by ferns is the picturesque small waterfall that we’ve set out to visit! We’re told that glow worms can be seen near the waterfall at night – so we’ll try the walk at night next time!

It’s back the same way – a very pleasant and easy walk with lots to see. (Next visit, we’ll try the slightly harder track to Burralow Creek, which descends steeply to the valley.)