A fun “jungle walk” near KL following the Pisang River (Sungai Pisang) through a set of tunnels under the Karak Highway and up to the picturesque Pisang Falls.

I’ve got a couple of days in Kualu Lumpur on the way to a trip across Borneo; just enough time to engage local guide Eddie Yap for a half-day jungle trek with my son. “Something I haven’t done before, not too far from KL” was my detailed brief 🙂

It’s less than an hour’s drive from our hotel in KL to the start of the walk, just past Batu Caves and along the old highway that goes up to Genting. After a brief walk along a rough path that follows the river bank, the river runs under the Karak Highway through two huge tunnels. 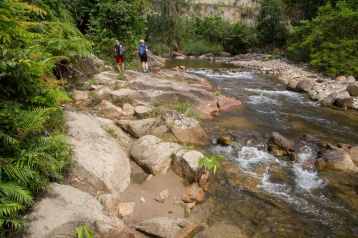 We leave our shoes on, and enter one of the dark tunnels – it’s possible to keep your feet dry if you keep to the very edge of the tunnel, where there’s a small ledge…

…although our shoes don’t stay dry much longer, with the the trail crossing the river a few times – and sometimes the trail is the river itself.

Unlike most previous walks with Eddie where we are climbing up steep hills or mountains, this walk is fairly flat with the path following the river upstream. It’s a rough track though, as we cross sections of thick jungle roots and scramble under (or over) fallen trees and boulders.

It takes about half an hour to cover the 1.5km to Pisang Falls (also called Banana Falls), which have a drop of about 30 metres. It’s not crowded for a Saturday considering we’re only about 45min from KL – there are about ten people in the swimming hold beneath falls, and another ten or so people picnicking above the falls. The only steep section is from from the base of the falls up to the top.

There’s a camping and picnic area at the top, and the path makes a broad loop around the back of the Falls before descending again on the other side to the river.

We return the same way down the river and back to the car, the entire walk taking about 2.5 hours. It’s amazing how you can have a “jungle experience” and swim in crystal-clear water so close to KL!