The Bairne Track (or Bairne Trail) and Basin Track both provide access to The Basin, on opposite sides of this narrow stretch of water. You can join these into a longer circuit thanks to a regular ferry service that connects the two jetties…

It’s easier to start on the Bairne Track, as the ferry only goes in one direction; by doing the walk in reverse you’ll have a much longer trip, taking the ferry to its terminus at Palm Beach and then all the way back through a number of coastal villages. It’s also a bit tricky to find the narrow trail that goes back up from Coasters Retreat to the Bairne Track, which is not sign-posted.

From West Head Road, the Bairne Track (a well-formed maintenance trail) is fairly flat as it goes through low forest. After 2.4km there’s a small cairn on the left marking a fairly faint trail, which is shown on Google Maps as providing access to The Basin and Bonnie Doon wharf; ignore this and keep on the main track (this side-track seems to peter out, although it may provide another way to get down to The Basin). Another 200km on and there’s a big fork – take the left-hand option towards Soldiers Point. (The right-hand option leads to a very pleasant lookout over Pittwater, and is worth a detour if you have time.)

The Bairne Track, near the start

Keep left here – the right-hand track leads to a lookout

The last section of the trail to Soldiers Point starts descending gradually, with the forest providing a bit more shade.

It’s been raining for the last three weeks. This mushroom is happy about it. I’m not. 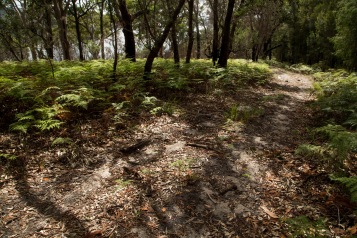 The “official” end of the Bairne Track is at Soldiers Point, about 3.4km from West Head Road where I’ve started the walk. If I was a real estate agent I might describe it as “filtered views” of The Basin and Pittwater; there are some views but they not particularly good from here.

At the far end of the Soldiers Point there is a faint but obvious foot-track that heads steeply down the ridge. There are a couple of cairns, but the track is fairly easy to follow. (Note: this track down from Soldiers Points doesn’t appear on most maps.)

The track ends behind a couple of houses at Coasters Retreat, a small community of about fifty holiday houses set in the bush and beside the beach. While the earliest houses date back to 1922-26, the area was used from the early 1800s by boats heading our from Sydney: “From the earliest records of the colony the bay was known as Coasters Retreat and the lagoon was known as The Basin… It was here that the convoys were formed up, the cargoes trimmed for the voyage down the coast. The first recorded convoy left the shelter of Coasters Retreat on 3 March 1803.” [Pittwater History]

I walk between two houses to reach the track that runs along the water, in front of all the houses and past the rural fire brigade. Directly in front of me is the Bennetts Wharf, built in 1944 to service the holiday houses. 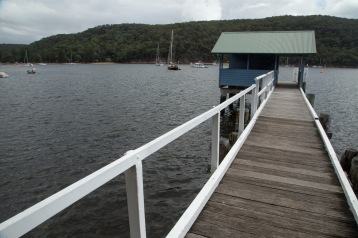 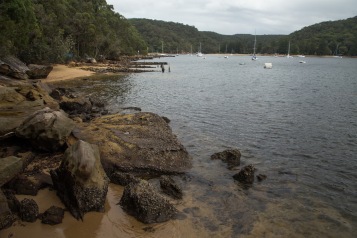 Looking west from Bennets Wharf towards The Basin

While I can catch the ferry across to The Basin from here, I continue walking to the far (west) end of Coasters Retreat. I’ve got plenty of time to the next ferry – and I want to see if it’s possible to cross the narrow stretch of water by foot. It’s about 800m to Bonnie Doon wharf at the other end of Coasters Retreat, which is the original wharf built in 1914 by the Ku-Ring-Gai Chase National Park to provide access for campers and visitors. 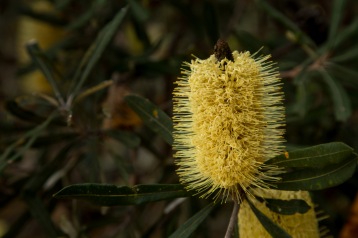 Banksia flowering near the beach 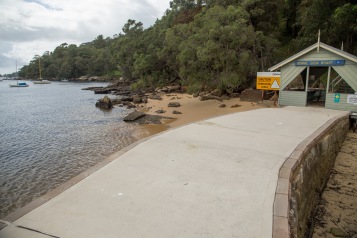 I’m there just before low tide, and I’ve read reports that you can wade across. The Basin campground on the other side looks tantalizingly close, on the other side of the narrow inlet. So I take off my shoes, and hoping not to step on any sharp oyster shells I wade across, following the shark net. At about the half-way mark, I’m up to my waist and it is still getting deeper… not really wanting to replace my camera and iPhone again (after my rather poorly planned Wollangambe adventure earlier in the year), I give up. 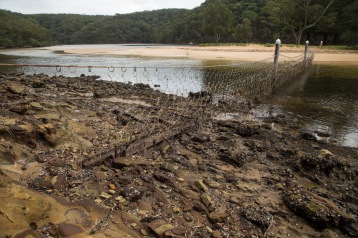 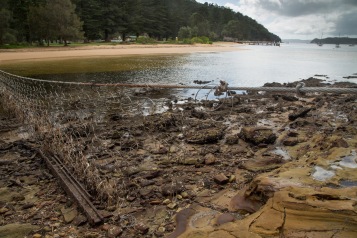 It’s a quick walk back to the Bonnie Doon wharf, where the ferry takes about three minutes to deposit me (and a few other picnickers and hikers) at The Basin wharf, directly opposite. (The ferry service operated by FantaSea comes every hour from 9:15am to 5:15pm, with no ferry service at 1:15pm). 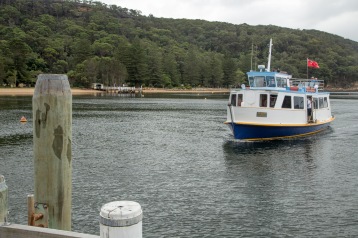 From here, it’s a steep walk up the Basin Track (or Basil Trail) back up the hill. There’s a small cascade that tumbles next to and under the track, after about 500m with a small waterfall below the track. 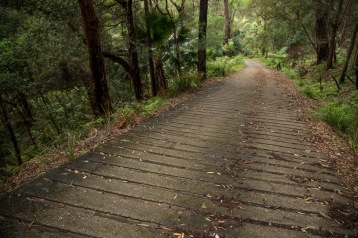 Small cascade next to Basin Track

It’s a generally unpleasant track, and (other than as a return route from the Bairne Track) not one I’d recommend: almost half the track is concreted, and while the road is closed to public vehicles, I don’t particularly like seeing speed signs when I’m bushwalking. There’s also very little shade alone the track.

After about 2km (from the wharf) the track flattens, and there’s a turn-off to Great Mackerel Beach (ignore this – it’s an alternative and nicer circular walk you can do). After another 300m there’s an Aboriginal engraving site, with outlines of animals and human figures, accompanied by interpretative signage. 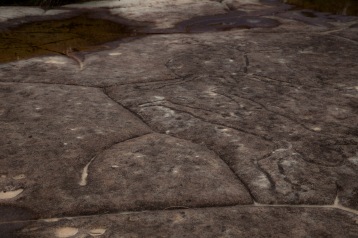 Aboriginal engravings on the Basin Track

Aboriginal engravings on the Basin Track

And that’s about it: 400m from the engraving site and I’m back at West Head Road, and then there’s a rather dreary (but quick) 2.4km walk along West Head Road, back to the car.

All up, it’s taken a bit under three hours, including a half hour wait for the ferry.