A tough hike up Mount Agung (Gunung Agung), the highest point on the island of Bali in Indonesia.

Being the highest mountain on Bali, I was determined to find a day to hike to the summit during our one-week family holiday in Bali. Mount Agung is the tallest peak on Bali and the fifth tallest volcano in Indonesia, influencing the area’s climate by taking water from clouds from the west and leaving the western side lush and green, while the eastern side remains dry and barren. The Balinese hold great reverence for Mount Agung, and the Mother Temple Pura Besakih is near its base (which is my starting point).

I found myself a guide via a Google search – getting there in the middle of the night on my own wasn’t really a challenge I was up for – and I organised to be picked up from my Nusa Dua hotel around 10pm. After a 2-hour drive to the start of the hike, we set-off with the intent of watching the sunrise from the summit. It was surprisingly chilly, although it was around midnight and the starting point at Pura Besakih is at an elevation of 1100m.

I can’t remember much of the start of the walk: it was dark and I was tired! There’s a large  car park with a few stalls selling water and other essentials. There were not many people around, despite this being a popular hike.

The narrow path ascends steeply through thick forest, and I’m not chilly for much longer from the exertion. We make good progress, and just before climbing above the forest line my guide collects some sticks and firewood, and makes a small fire. We have a break of an hour or so, to avoid arriving at the summit well before dawn. It really is cold when you stop walking, and I wouldn’t have wanted to be on the exposed peak waiting an hour for the sun to rise!

Having resumed our climb, I reach the summit at 5:5oam, just as the sky begins glowing red behind Mount Rinjani on the island of Lombok, to the east. It’s about 4:30min of walking plus an hour rest-stop.

The summit is at 3,031, above sea level – although the sign at the top says 3,142m, which is apparently an old elevation that doesn’t take into account a volcanic eruption in 1963. 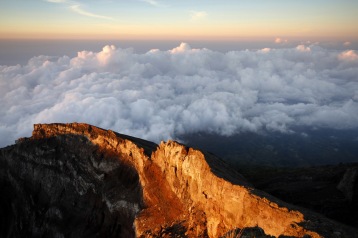 As the sun rises, I can see into the large crater that we are standing on the edge of. There’s now a small number of people (around 10) on the summit.

Taking the same route back down, the path initially ascends slightly as it follows the ridge to the west. There’s a steep drop on both sides – but contrary to some reports I’ve seen, there’s no scrambling involved and you never really feel any sense of danger.

At the end of the first ridge, the perfectly conical shadow of Mt Agung appears in the clouds below. To the north-west is the lower, also volcanic, peak of Mount Batur. 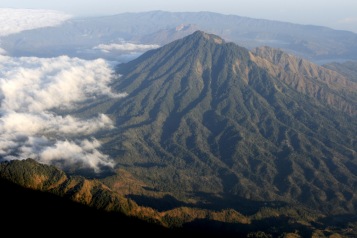 The path starts descending more steeply, through what feels like a lunar landscape. It’s fairly easy walking and despite the steepness, there’s not too much loose scree.

The next section goes down what feels like a sea of boulders… this was the toughest section coming up, especially in the dark, and needs some concentration. At the bottom is a small shrine, where our guide leaves a small offering. 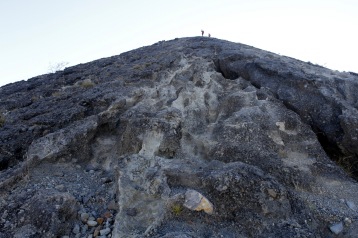 The final stage is back through the forest, initially with light tree cover and turning into rainforest as we get further down. I didn’t find this particularly tough on the way up – but going down it’s bloody hard.  It’s slippery, with some of the steeper sections having vines or ropes you can hold to. Despite having a fairly good sense of balance, I find myself frequently slipping on the muddy surface. 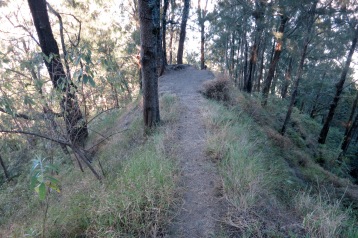 I’m glad to reach the bottom after three hours, a little worse for wear after the last section of the trail. We emerge back at the temple, where I buy some cold drinks for my guide and me, before the car trip back to our hotel. 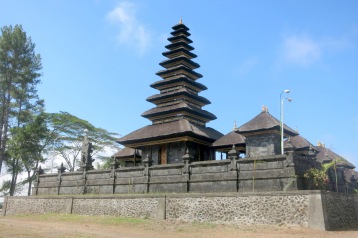 Besakih temple, start (and end) of the trek 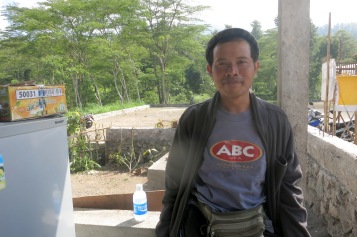 It’s been a fantastic hike – and one I thoroughly recommend if you happen to be in Bali!

A few tips if you are doing the Mount Agung hike: