A footbridge suspended over the Fier River provides a spectacular journey through a narrow and deep gorge, to La Mer des Rochers (Sea of Rocks), where the river has carved deep channels through the limestone rocks.

The Gorges du Fier is a spectacular narrow canyon carved out by River Fier, about 10km west of Annecy in the Auvergne-Rhône-Alpes region of Southeastern France. I’m staying on in Switzerland for a few days with my son at the end of a family holiday, and this one of a few day-trips I’m doing with my parents (who live in Geneva). One of the oldest tourist sites of the Alps, a suspended footbridge was erected in 1869 about 25 metres above the river. 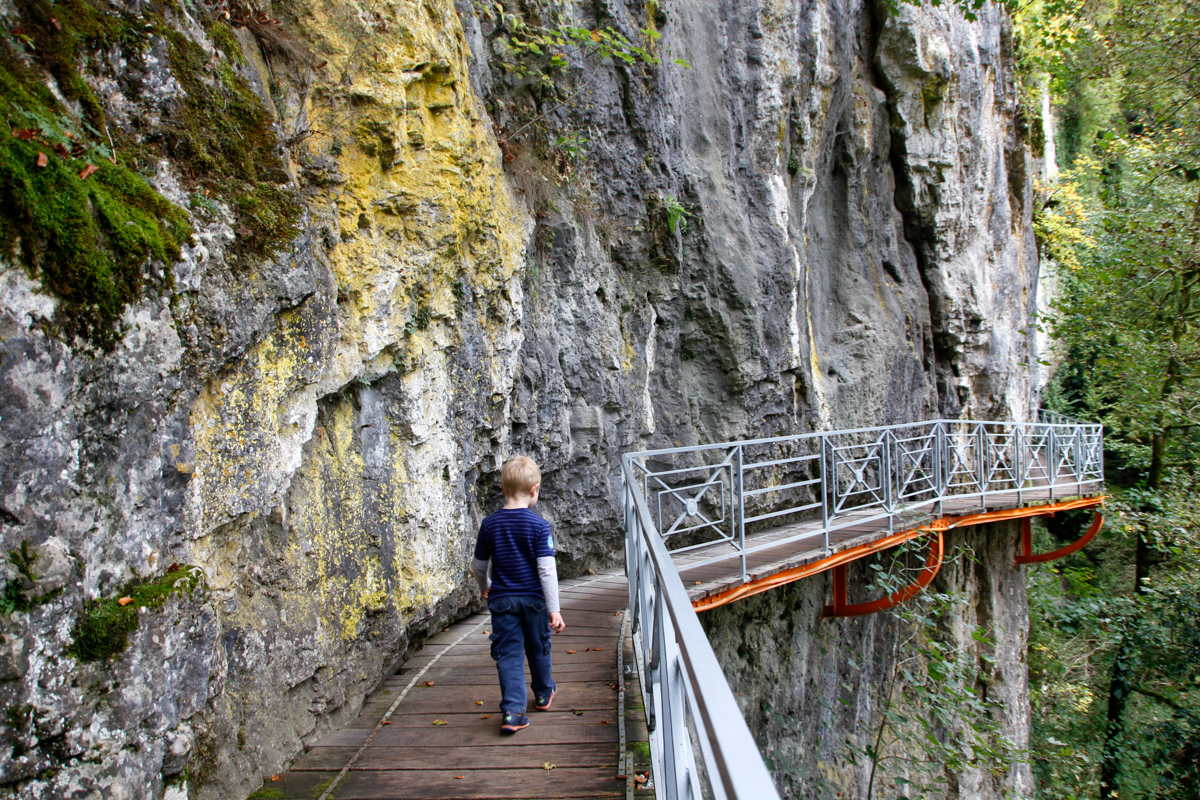 The current footpath looks like it may have been modernised or upgraded since 1869… it’s a very sturdy structure that stretches for half a kilometre along the gorge. 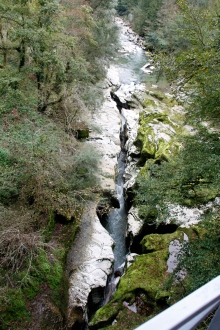 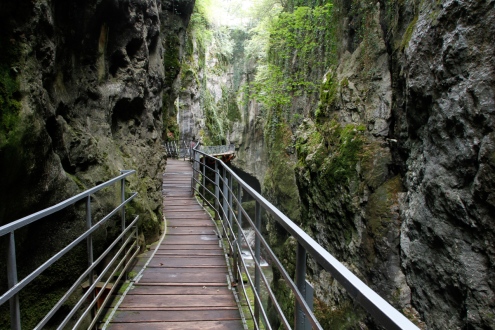 As the footpath progresses, the gorge gets narrower and the rock formations carved by the water more impressive. About halfway along the footpath, a measuring scale on the rock face indicates the water levels reached in times of flood (during heavy rain the river can rise 26 metres within a few hours). 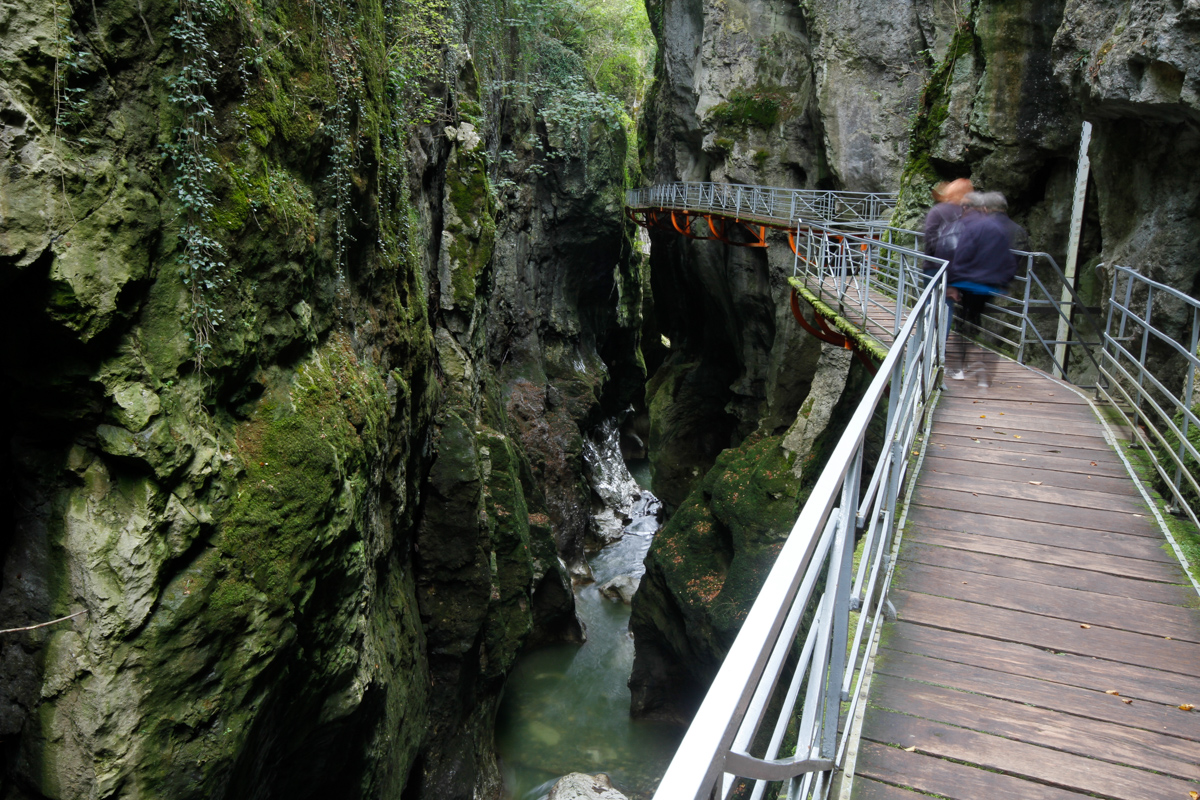 At the end of the narrow gorge, the footpath continues along the river to La Mer des Rochers (Sea of Rocks), a vast lapies, or labyrinth, of fissured rock. 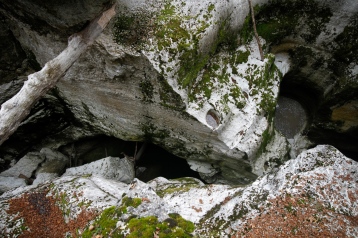 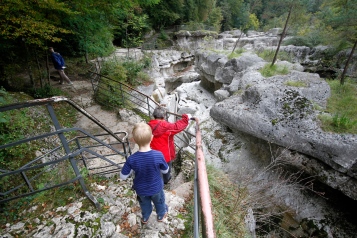 Thousands of years of water erosion have carved deep channels through the limestone rocks, often eroding the base of the rock faces resulting in natural formations called ‘convection niches’. 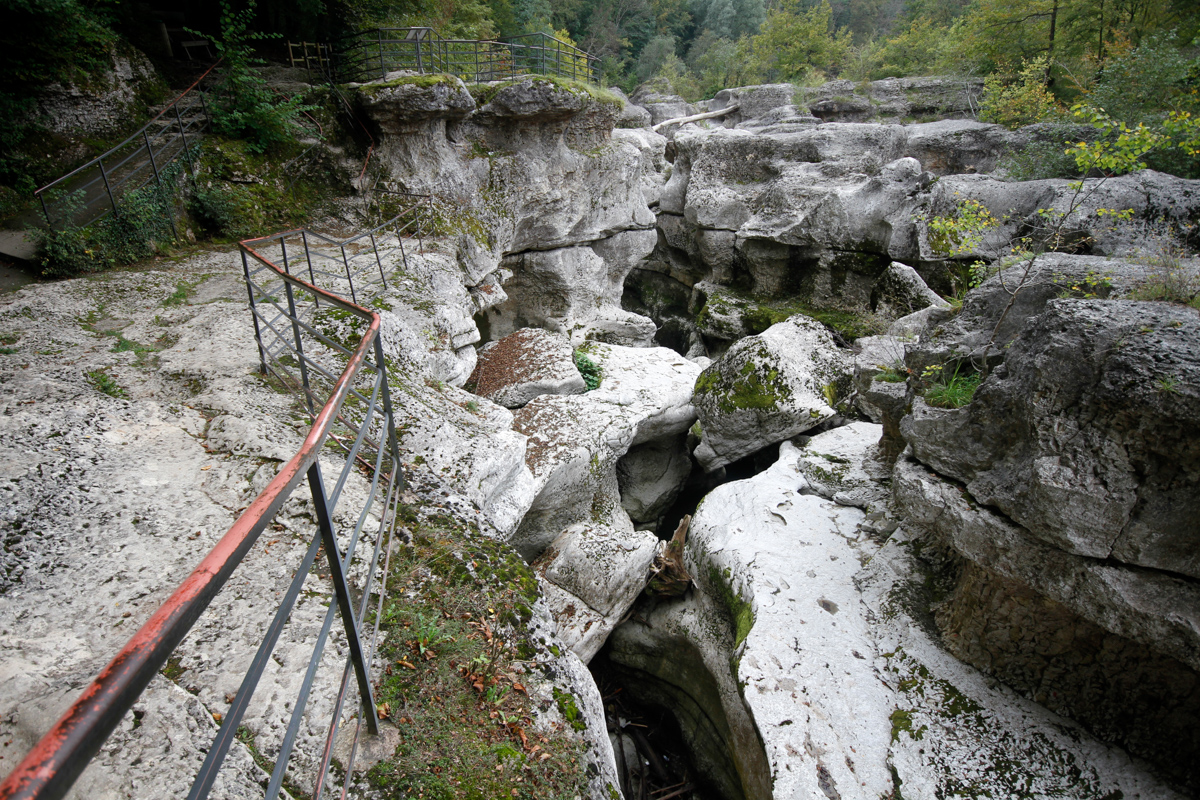 Along this section an “Îlot des Légendes” (Legends Islet) tells a local legend from the Middle Ages: in the castle above the gorge, Diane (a beautiful young countess) was married to the rich and powerful Count of Montrottier. Increasingly abandoned by her husband, the Countess often walked near the gorges with her loyal page, who was secretly in love with her. One day, they encountered the Count of Pontverre, a handsome knight and her husband’s rival. Realising that Diane was having an affair with Pontverre, the heartbroken page reported the affair to the Count of Montrottier. Montrottier set a trap at the Gorges of the Fier to catch the two lovers in the act, and when Pontverre was discovered he ran away, pursued by the young page. Disaster struck when the young page slipped and fell into the gorge. On clear summer nights, the local villagers say they can still hear the sound of wailing combined with the rushing waters of the gorge – the plaintive voice of the young page who mourns his lost love.

The path returns the same way back to the carpark and ticket office, where there is a display room with information on key historical events in this region and photos of the river in flood. 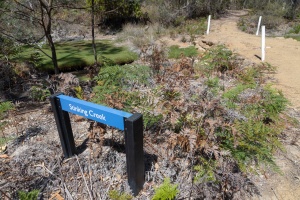