This full-day guided walk, rated as one of Australia’s best day walks, goes to the top of Mount Gower (875m) on Lord Howe island.

I’ve booked this walk to the summit of Mount Gower, Lord Howe’s tallest peak at 875m above sea level, shortly after arriving on Lord Howe Island. Considered to be one of Australia’s best day walks, it should be done with a guide and is offered once or twice per week. (Officially, a guide is not required but there is a strong preference that a registered guide be used.)

Our guide is Jack Shick, a fifth generation Islander and third generation mountain guide, who’s done this walk a few times… Our group of about ten people meets at 8:30am at the end of Lagoon Road, near Kings Beach. From here we follow a rough track along the coast to Little Island.

After about 1.2km, there’s a short, steep climb into the jungle on a fairly rough track, to the base of some high cliffs, which are part of the western buttress of Mount Lidgbird. Some ropes help on the steeper sections of the track. There’s a number of palm trees growing here, and Jack (our very talkative and informative guide) explains the history of the palm industry on the island, which continues today with the export of lives palms and seeds. Jack then shows us how to climb using a short sling. I have a go. And fail miserably.

Harvesting of palmseed begins at the end of February each year, and usually continues throughout winter into early spring. The seed collector first selects a palm, and then slips both feet through a loop of strong material – often made from layered hessian. Using this circular ‘strap’ to grip the palm trunk, the seeder then jack-knives his way to the top of the palm. (like “a monkey on a stick”.) The seed spikes are then wrenched from their positions underneath the crown of palm leaves, and are tossed or carried to the ground by the seeder as he slides back down the palm trunk. The palm seeds are then shelled from their spikes, and packed into jute or hessian bags before being carried to waiting vehicles. [The Palmseed Industry] 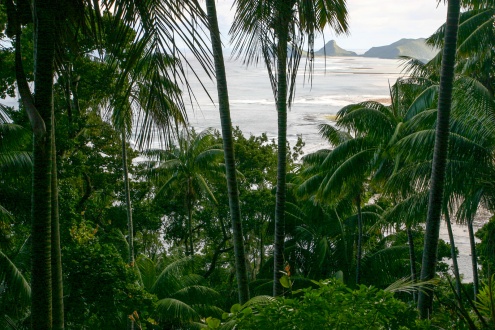 From here, the going gets fun – and a little exhilarating. It’s one of the reasons a local guide is recommended. We don some hard hats, for the Lower Road – a very long and narrow ledge, above a 150m sheer drop to the ocean below. Ropes stretch for 400m along the track. 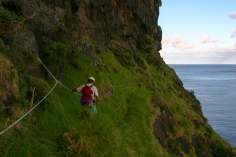 Perched above the ocean, there’s already great views all the way to the Mount Eliza at the northern end of Lord Howe Island. 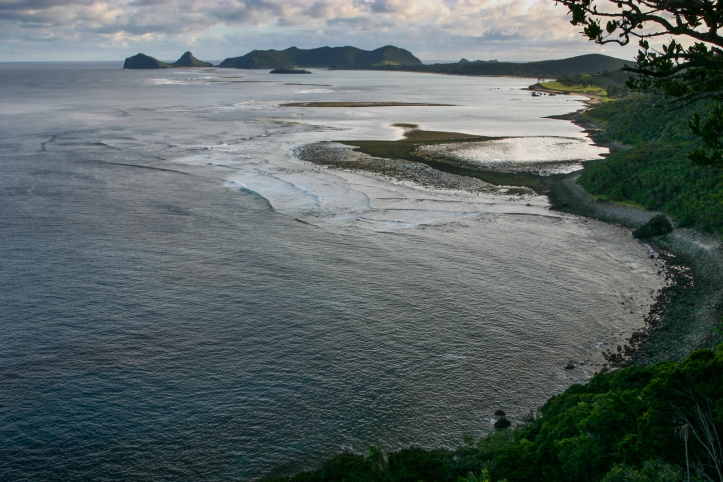 At the end of the Lower Road, the track goes back into thick rainforest again as it zig-zags up the lower slope of Mount Gower, before reaching Erskine Creek. Before crossing the creek, we fill up our water bottles with the clean water and have a rest break here.

The track continues south-east from here, climbing steadily up to a high ridge that links Mount Lidgbird (in front of us to the north) and Mount Gower.

From here there’s a final, steep ascent to the summit plateau, with a piece of rope to help ascend one particularly steep section. The peak offers stunning views over the island, from the jagged peak of Mount Lidgbird to lower peaks at the far end, and the Admiralty Island group to the north.

But wait, there’s an unexpected surprise… after we retreat to a small clearing surrounded by jungle, our guide starts making loud whooping noises. Which was soon followed by bird literally dropping out of the sky. It felt like I’d inadvertently wandered into the set of a David Attenborough documentary. Attracted by the noise and curious to see what’s happening (and seemingly having no fear of humans), an increasingly number of providence petrels were falling out of the sky and into our laps. I’ve never experienced anything like it. Despite a population of 64,000, the providence petrel is classified as vulnerable because its breeding is confined to the two mountain tops of Lord Howe Island Balls Pyramid, and is therefore at risk from a catastrophe. 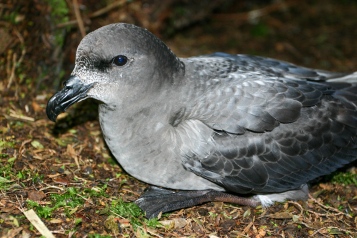 We also saw a number of Lord Howe Island woodhen, a rare and flightless brown bird about the size of a chicken. They were hunted to near extinction by the early 1800s, by humans for food and inroduced animals (owls, feral cats, pigs and goats) which preyed on the woodhens and destroyed their habitat. In 1966, the International Union for the Conservation of Nature (IUCN) classed the woodhens as endangered, and by the early 1970s there were less than 30 Lord Howe Island woodhens left (confined to summit areas of Mount Gower and Mount Lidgbird). A captive breeding program was started in the 1980s, and since then the population reached over 200 in 1997, before declining in 2001 to 117 birds.

Another bird that makes its presence known is the Lord Howe Island Currawong, a subspecies unique to the island and a very smart bird. Common around the island walking tracks, it shows an interest in Jack’s lunch and hangs around our lunch spot hoping for some for food.

Around the peak are also some of the island’s rarest plants, (Lord Howe has recorded 241 species of indigenous plants of which 113 are found nowhere else in the world. Jack pointing out some of these, including native orchids and flowering palms. 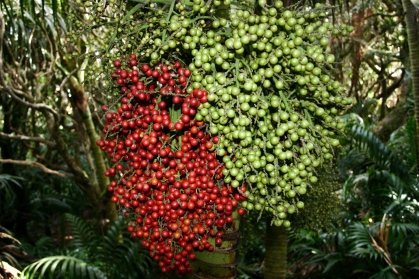 After lunch at the summit, it’s back the same way… we finish around 4pm at the bottom, in time to catch another Lord Howe island sunset!

It’s been an incredible walk – worth it for the views alone, but with the bonus of “falling birds” and interesting plants we see, combined with Jack’s interesting commentary. It’s not an easy climb, but the pace is fairly slow being a group, so even if you’re nor super-fit you should fine to undertake this walk!