The Six Foot Track has become one of the “classic” NSW overnight walks since it was opened for bushwalking in 1984. It follows the route of the original six foot wide bridle track between Katoomba and Jenolan caves built in 1884.

My relationship with the Six Foot Track goes back to March 1989, about five years after the historic route was re-opened as a bushwalking track, when I attempted the walk with my Dad and younger sister. Four days of heavy rain rendered the Coxs River unpassable, at least without a rope, and we turned back after camping for one night (the Bowtells Swing Bridge, constructed three years later, now provides an alternate route for the Six Foot Track when the river is in flood.) I’ve still got the original “Six Foot Track” brochure issued by the Department of Lands in March 1985! 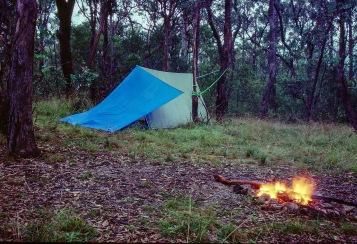 My next attempt is with a couple of friends 16 years later, which is planned as a three-day walk in the winter of 2005. It’s overcast but not raining when we set off around 11am from the Explorers Tree and down a narrow track with a series of timber steps through Nellies Glen Canyon. After about 2.4km, the narrow track reaches Nellies Glen Road,  which it follows gently downhill through scribbly gum forest. Most of the track so far is through private property, with Nellies Glen Road being accessible by 4WDs and used to access private land (although we don’t encounter any vehicles).

At the 8.2km mark the Six Foot track crosses the sealed Megalong Road; a short distance to the north is the car-accessible Old Ford Reserve campsite (toilets and water from creek – must be treated). The track passes the Megalong Cemetery after about 500m, the final resting place for at least 14 people who died between 1894 and 1931. For the next few kilometres the Six Foot Track traverses more open farmland. A legal right-of-way was negotiated with the Euroka property and part of the track is a farm access road. There are nice views of the escarpment behind us, which is perhaps the only reminder that we are actually in the Blue Mountains on and not walking through a farm!

We reach the Coxs River around 3:15pm after almost exactly fours of walking, crossing it via the Bowtells Swing Bridge which was constructed by the First Field Squadron of the  Royal Australian Engineers and opened in 1992. This has become the standard crossing route, even when the river is not in flood. Although there are swimming holes around here, it was way too cold for a swim – and I’m not sure I’d want to swim in the Coxs River even on a hot day. Despite being the second largest source of water for the Warragamba Dam (which supplies most of Sydney’s drinking water) the river is one of the most polluted rivers in the Blue Mountains. Testing carried out in 2008 showed that the upper Coxs River had high levels of heavy metals, 125 times more sulphate and pH levels up to 1000 times higher than that of neighbouring creeks, and only 5% of the oxygen that fish need (Wikipedia). Even visually it doesn’t look very appealing for a swim! 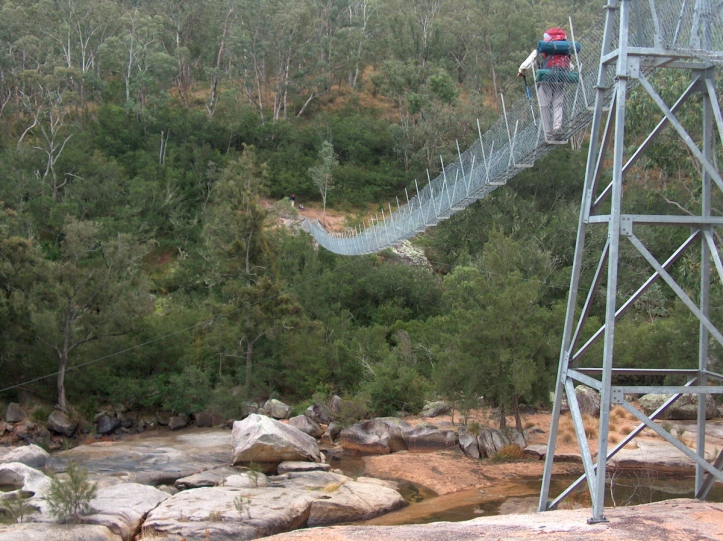 We continue walking, having a few hours of daylight left. The track now continues along a dirt road (Glen Chee Road) which is also open to cars, ascending quite steeply at first up to the Kiangatha (or Kyangatha) Yards and then further up to the Mini Mini Saddle. From Mini Mini Saddle (at about 780m asl) the track heads downhill through tall peppermint gums to the Alum Creek Camping Ground. A fairly flat grassy area off the side of Glen Chee Road, this campsite is the least used and least developed of the three official camping areas on the Six Foot Track. We keep going, and about 800m further and with light starting to fade, we find a grassy area next to Little River where we set-up camp. I’m not sure if we are allowed to camp here – one of the challenges of the Six Foot Track is that many sections traverse farmland – but we haven’t passed any “no camping” signs for a while.

We wake up to heavy fog, which makes for some scenic photos as the morning sun rises above Little Creek. 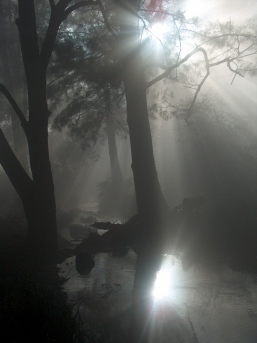 We’re back on the track (which is still the Glen Chee Road) around 9:30am –  a relatively late start, but we’ve done about half the distance and we’d planned on completing the walk in three days. The dirt road ascends again initially through fairly open farmland, fording Little Creek another couple of times before reaching a gate marking the Kiangatha property boundary. The fog is starting to clear and is replaced by blue sky. 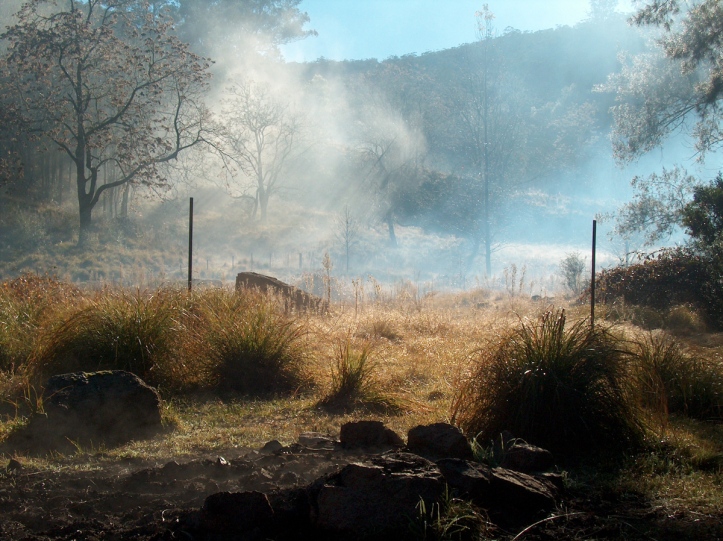 There’s one more fire trail after another three kilometres, with the Warlock Fire Trail on the left heading to Mt Warlock. The Black Range Road then passes through some pine plantations and a Kanangra-Boyd Information Board before reaching the third official camping site, Black Range Camping Ground. A large grassy area, this campsite is also at one of the highest points of the walk (1,200m asl) – so it can get chilly at night. It has picnic tables, water from a tank, toilets – and is also accessible by car.

It’s pretty much all downhill from here…  three kilometres (about an hour) after the campground, the track crosses Jenolan Caves Road.

The track now roughly follows Jenolan Caves Road, up to Jenolan Caves Cottages (another spot you could stay if you wanted to extend the walk over three days without carrying a tent!). From here the track takes a different route from the road, as it continues to descend, gently at first and then more steeply. There are some views over Jenolan Valley to the right.

A set of stairs leads to a fenced lookout near Carlotta Arch, a large cave remnant overlooking Blue Lake that is believed to have been named in honour of a daughter of a surveyor. 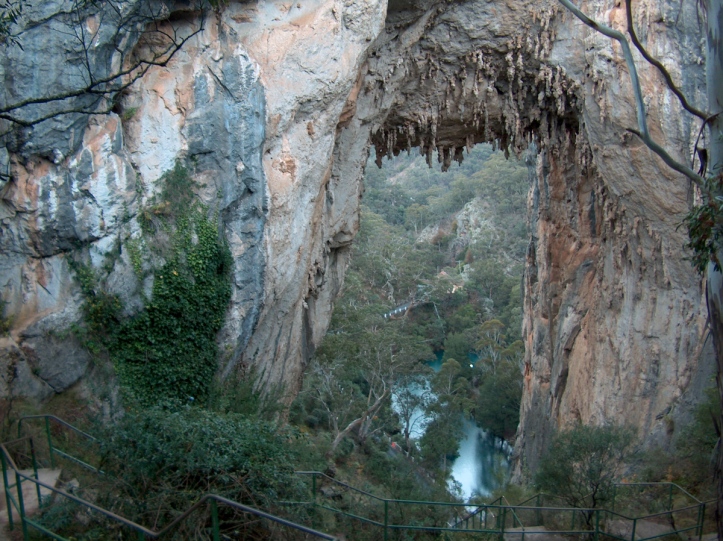 This is just about the end of our walk. The path from here zig-zags fairly steeply downhill for beside the limestone cliffs down to Caves House, where a ‘Six Foot Track’ sign points up the steps. We reach Jenolan Caves at 6pm on our second day, and hope there might be some way to get back to Katoomba (or a railway station). The bad news is there’s absolutely no public transport options anywhere after about 4pm… but, one of the Jenolan Caves staff takes pity on us, and gives us a lift up to one of the Blue Mountains railway line stations.

I’m glad to have finally completed the Six Foot Track. But the fact that a significant proportion of the track is through private land and along public roads, and every campground is accessible by car, means that in hindsight it’s not a walk that I would recommend. Not if you’re looking for a wilderness experience, anyway… as a family walk with young kids where you’ve got multiple exit points, maybe it’s a good option. Or as a long day-walk. Or a two-day walk staying at one of the commercial accommodation providers along the track, so you only need to carry a day-back. Alternate and better overnight options if you want a real Blue Mountains experience include: