A straightforward but steep walk to the top of Mount Charles (408m), the highest point on the Otago Peninsula. Stunning views fron the top! The route is through private land, so seek permission first.

We’re staying at Allans Beach Farmstay on the Otago Peninsula, which is conveniently located at the base of Mount Charles. The tallest point on the Otago Peninsula at 408m above sea level, the “mountain” features in many vantage points around the peninsula – from Pukehiki it can be seen rising behing Hoopers Inlet.

From Sandymount (another great walk!), it can be seen directly behind Allans Beach.

The entire mountain is private land (used for grazing sheep and cattle), so I check it’s OK with Christine, our host at Allans Beach Farmstay. She enthusiastically confirms it’s no problem, so I set off from Allans Beach Road the next evening. On the way up I try and find an old trail that’s marked on my topographical map – but there’s no sign of a foot-track, and you really don’t need one. It’s easier to just walk as directly as possible up to the peak. As I gain altitude, there’s a nice view of Allans Beach Farmstay and Allans Beach, with Sandymount behind the beach.

As I follow the fence-line up, I’m attacked by two cows. Which is probably a slight exaggeration… I think they were more curious about why someone was traipsing through their meadow, and keen to introduce themselves. I’m not really a cow person, so I quicken my pace up the mountain! 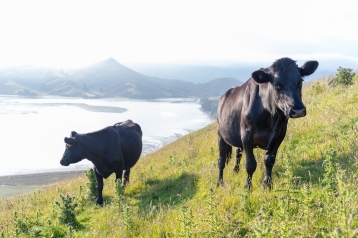 As I gain altitude, there’s a nice view of Hoopers Inlet with Harbour Cone behind it, Papanui Inlet (also just visible is Gearys Hill Quarry).

I make a slight detour to a rocky knoll (elevation approx 330m asl), which has some great views over the coast. To the south is a small unnamed beach, and 250m offshore the small island of Wharekakahu.

To the west is Allans Beach, Sandymount and the end of Hoopers Inlet, behind the lower flanks of Mount Charles.

I resume the climb, following the fence line directly up from the small knoll, hoping to reach the summit before the clouds rolling in from the north obliterate the view!

The “summit” itself is a bit underwhelming… some rocks with a few fence posts sticking up. It looks like there used to be a trig point – but I reckon the winds must get pretty cyclonic up in here in bad weather. 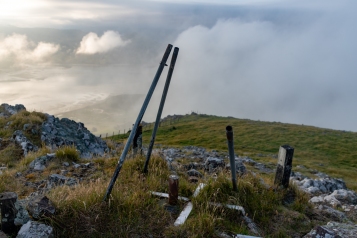 The views, on the other hand, are stunning… I shelter for a while as the clouds start to clear.

Wandering a bit further north to get a view, a stunted and windblown tree is evidence of the ferocity of the southerly winds which blow over the top of Mount Charles.

While some of the higher cloud persists, there are views to the north over Victory Beach, with the Te Whakarekaiwi headland jutting out at the end, and Quion Cliff behind.

Looking west, you can see most of Allans Beach, Hoopers Inlet and Papanui Inlet behind the fertile green slopes Mt Charles.

You can see most of the eastern coast of the Otago Peninsula, from Victory Beach to the headlands of Ohinepuha and Oteghata at the end of Cape Saunders, and Allans Beach.

I wait a bit longer on the peak, as the sun sets behind Hoopers Inlet, and the moon rises above it. 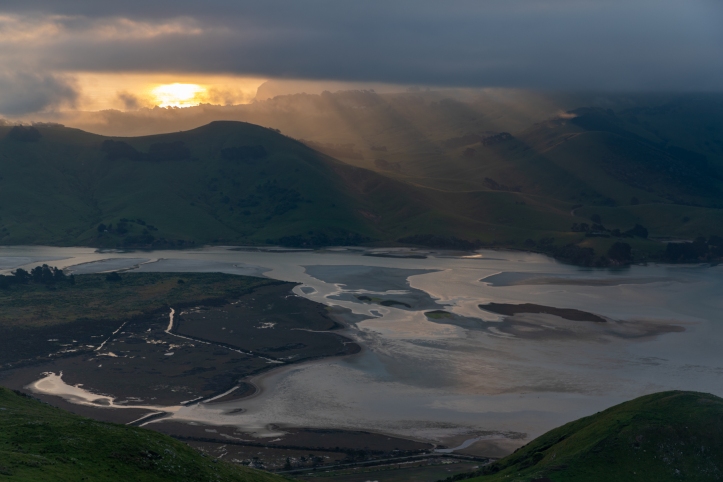 I’ve got a head-torch with me, but I set off back down the hill before it gets dark, the sheep and cows looking at me warily as I cross their territory. I take a quicker and more direct way down, following the fence line straight down to the gate at the bottom.

Although this walk is a bit trickier as you need to get permissions, it’s worth it for the views – try and go early in the morning or at sunset, on a clear day.