A short walk to a very beautiful (but busy) beach on the South Coast, with views from Governors Head across to Bowen Island.

Murrays Beach is a sheltered and very scenic beach in Booderee National Park (Jervis Bay). It’s accessed via a fairly short (300m) walk from the car park – or by following the coast around from the jetty. (If taking the track rather than rock-hopping along the coast, continue past the first car-park to the parking area that’s furthest from the entry road. There are multiple, huge car parking areas that probably reflects the decision in 1969 to build a nuclear power station here, resulting in land being cleared and footings built before the decision was reversed in 1971.) 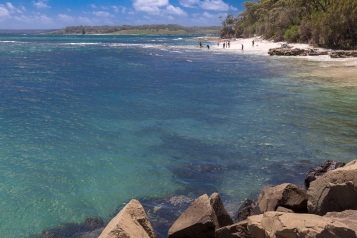 As we make our way slowly across the rocks (it was close to high tide, and it would be much easier this way at low tide), we spot what seems to be a naval training exercise on the opposite of Jervis Bay. 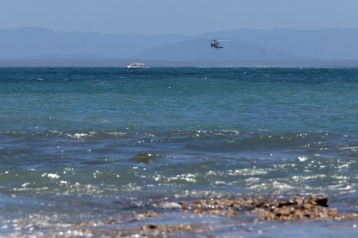 It doesn’t take long to reach Murrays Beach, which has been described as “the jewel in the Booderee National Park”. It has the same white sand as the famous Hyams Beach, very clear water and supposedly less people – although it was pretty busy today!

It’s also protected from bad weather by Bowen Island, which bears the brunt of any big swells and means even on a day with dangerous surf warnings, the kids could safely swim.

From Murrays Beach it’s an additional 800m to Governors Head, directly opposite the peninsula. (This is part of a longer walk that goes up past Hole in the Wall and up to Green Patch.) It’s a wide and easy to follow track through eucalypt forest, with some interpretative signage.

The track follows the edge of the cliff, which gets steeper towards the end of the peninsula. A fenced viewing area at the end provides a great view towards Bowen Island, with the shallow channel bearing the brunt of strong winds and a large swell. 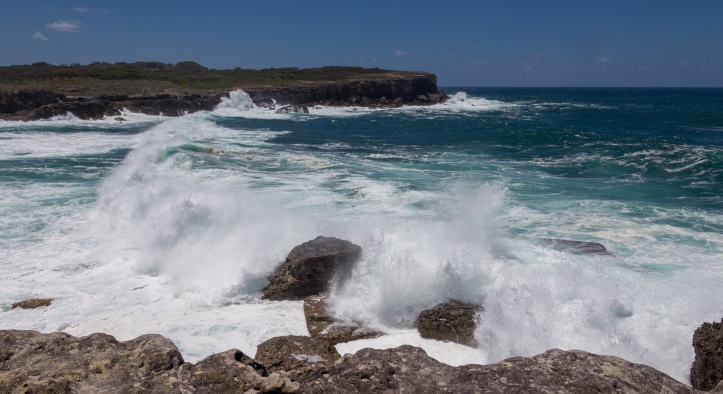 Going back, I follow the coast instead of the marked track, descending down the steep slope to the rocky shore, which is fairly easy to follow. There are a few other people observing the massive waves, and a pair of sooty oystercatchers, foraging in the inter-tidal zone.

There’s a few sections where I need to detour slightly inland to avoid small inlets – it’s not difficult walking but I wouldn’t recommend going this way with small children. Eventually I reach the shore again, and walk back along Murrays Beach to my starting point. 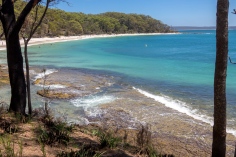 It’s a great beach for swimming, and adding the short walk to Governors Head was worth it for the view (especially if it’s a day with a big swell). With more time, I would have liked to continue up the coast at least to Hole in the Wall. But that will have to be another day!