A short bushwalk in Terrey Hill leads to a couple of well-hidden Aboriginal engraving sites. The walk to the first rock platform is pretty easy, with the trail winding through eucalyptus trees and long grass.

Although the walking trail is unmarked, a blue sign in front of the rock platform states that this is a protected Aboriginal site. Stanbury & Clegg in their Field Guide to Aboriginal Rock Engravings refer to this area as the “Hunting Site”, and suggest that it denotes a successful kangaroo hunt. This would be used for an “increase ceremony”, designed to promote the fertility of particular plants or animals. There’s also an argument that because the man has a large penis, and is wearing a head-dress, the site might be associated with creator spirits such as Baiame (Ray Norris). 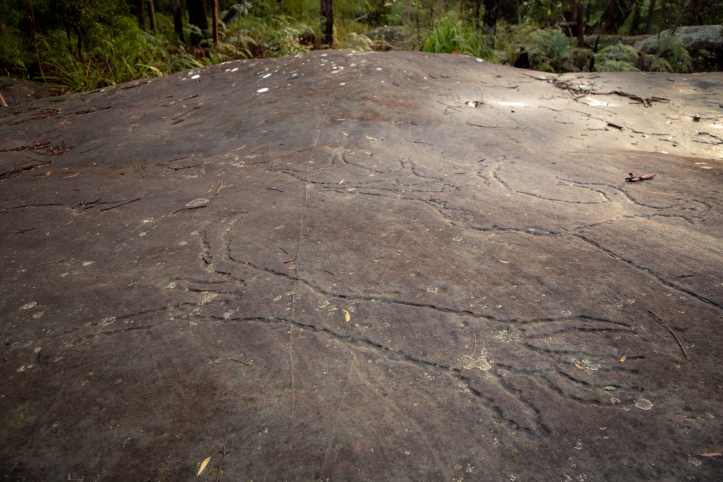 As well as the man, there are two women and two kangaroos (or a kangaroo and a wallaby).

A line of mundoes (footprints) may represent the steps taken by the hunter as he stalks his prey; there are 8 between the man and the creek. 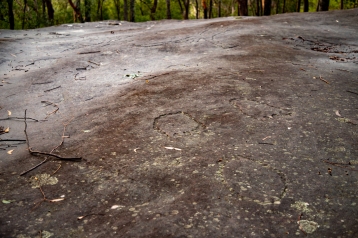 It’s a bit tricker to reach the second site, which is on the other side of a small creek. A rough and sometimes indistinct trail heads down to the clear and picturesque (unnamed) stream, which flows into Kierans Creek.

Further up the hill on the other side is a long series of rock platforms, one of which contains a number of engravings.

In the middle is a lyrebird, after which the site is named (the tail feathers indicating it’s male bird). 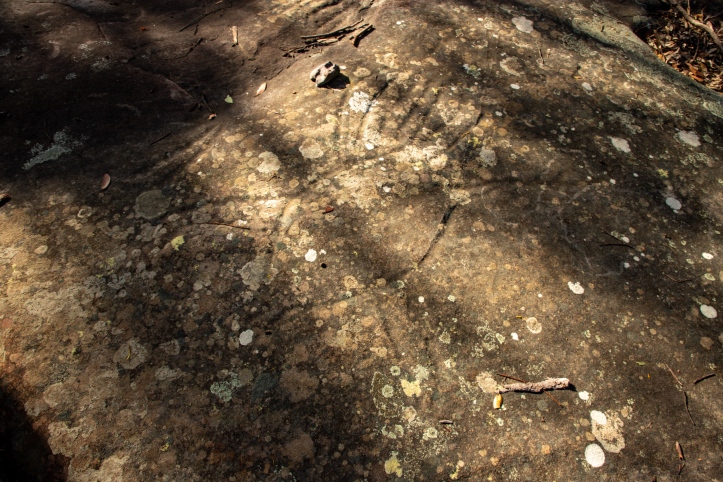 Other engravings on the rock include kangaroos (or wallabies) and a flying possum (below) as well as two echidnas and twelve arrows around the site, which may represent lyrebird tracks.

Not far away are some interesting rock formations and a sandstone cave, with a large column that’s been sculpted by the wind and rain.

On the roof of the cave is what appears to be another Aboriginal carving. I’ve been advised it may have formed part of a larger drawing (the remainder having been damaged or eroded over time), and could be the leg of a creator spirit.

It’s a nice spot that feels much further away from civilisation than it is; I’ll come back when I have more time and explore the area further.