Jims Track leads out to a lookout over Cowan Creek and the Hawkesbury River, and provides access to Hungry Beach and Little Pittwater Bay.

A relatively unknown track at West Head, Jims Track was established over 70 years ago, and provides access to a lookout over Cowan Creek.

The track is fairly easy to follow, with a few vantage points along the way over Cowan Creek in the distance.

Near the end of the track, a very steep and rough path provides access to Little Pittwater Bay, descending initially through low ferns and grass trees.

At the bottom is a section of rainforest, with a small stream cascading over a rock platform to the beach a bit further down. 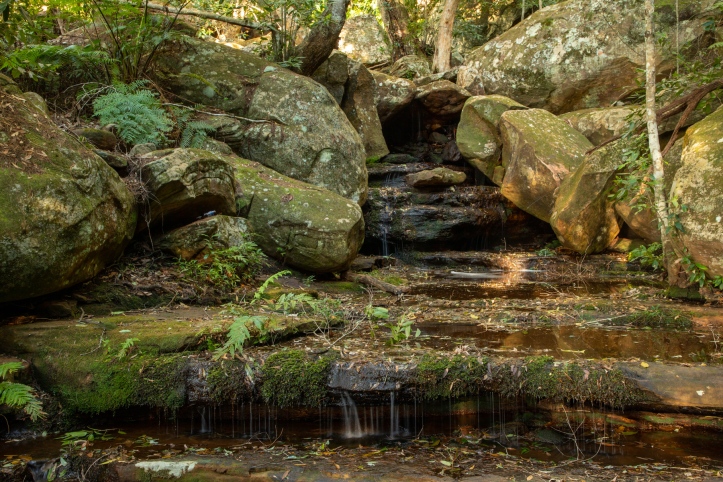 A final bit of scrambling across the rocky creek gets me to the very small and secluded Little Pittwater Beach.

It’s covered in driftwood and debris, but is a nice spot.

It’s back the same way back up the steep track, as it’s now getting late in the day.

The track continues further west towards the coast, past some rock formations and a huge cave.

Another rock cairn marks a track down to Hungry Beach – although unlike the Little Pittwater Beach track, there’s really no track here. It’s more of a scramble and a slide down the steep slope. 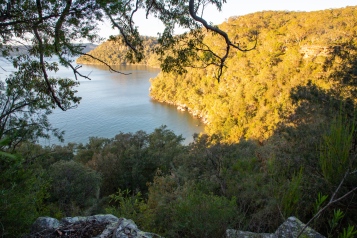 I’m surprised to find one group of people on Hungry Beach; they’ve reached the beach by following the coastline from Flint and Steel Bay. They’re equally surprised to see me emerging from the bush.

I don’t stay here long as I need to get back before it gets dark; once back on Jims Track it’s not far to the end of the track, which overlooks the end of Cowan Creek and the Hawkesbury River.

I’m here just in time to catch the sun setting over the Hawkesbury River and Brisbane Water National Park.

It’s a nice little track, and a good workout after the descent to both Little Pittwater Beach and Hungry Beach!