Wondabyne to Woy Woy via Pindar Cave and Mt Wondabyne is a interesting bushwalk in the Brisbane Water National Park. It incorporates a section of the Great North Walk, as well as the side-track to the impressive Pindar Cave.

I’d planned an overnight walk in the Blue Mountains, but the weather forecast of 0 degrees overnight and “feels like -7 degrees” with the wind chill factor gave me cold feet (pun not really intended). Instead, I’m doing a relatively easy bushwalk to the north of Sydney, from Wondabyne to Woy Woy via Pindar Cave and Mt Wondabyne. (Although I could have started a but earlier and finished at Patonga, I wanted to get some sunset photos from Mt Wondabye.)

It’s a bit of a late start – I discover just before reaching Wondabyne that I’d removed the SD card from my camera, necessitating a diversion to the shops at Woy Woy to purchase a spare memory card. It means I’m not disembarking at Wondabyne station until 12:45pm. I always like starting a bushwalk at Wondabyne: it’s the only train station in Australia inaccessible by road. And with a tiny platform that’s barely the length of one carriage, you need let the train guard know you’ll be disembarking here, and make sure you’re in the last carriage of the train. (It was also the site of the first International Sculpture Symposium in Australia in 1986. I remember the odd site, many years ago, of a dozen enormous sandstone sculptures by the water. They stayed in situ for eight years, before being relocated to the Mt Penang Gardens in Kariong.) 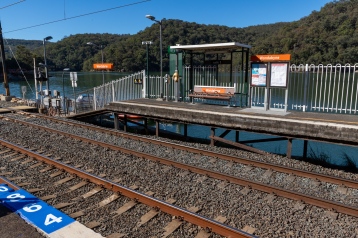 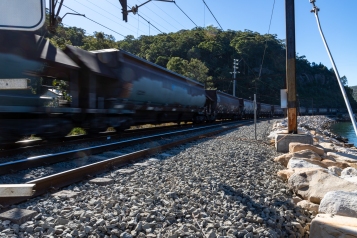 From behind Wondabyne station, the track immediately heads up the steep ridge, through tall trees and past some sandstone rock formations. There’s a view of the Wondabyne Quarry almost direcrly below, the oldest operating quarry in Australia. The quarry has a fascinating past, having provided the sandstone for the pylons of the nearby 1886 Hawkesbury River Railway Bridge and the Australian War Memorial, and most recently for the restoration of the two spires of St Mary’s Cathedral. Increasing use of the northern train line meant that the rail siding that used to transport the sandstone blocks by train was decommissioned in the early 2000s. The sandstone is now carried across the railway line in the short window available during trackwork, and then conveyed by barge down the river. 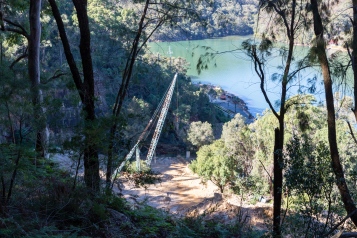 After the short climb (about 100m elevation) the track reaches a small clearing, and becomes a firetrail – the Rifle Range Firetrail. It continues to ascend – but far less steeply. After about a kilometre there’s a distinct but unmarked track to the left, which is the trail to Pindar Cave (MGA Gunderman 376 938) It’s a wide firetrail at first, and then after a small clearing becomes a narrow track.

While the track is easy to follow, it’s quite overgrown – long sleeves and pants are recommended to avoid getting scratched. From time to time the track crosses a rock platform, and there’s the occasional view over the Brisbane Waters National Park. But mostly you’re defending yourself against low branches and the dense scrub that’s encroaching on the path!

There’s not much of a view from Mooney Mooney Creek Lookout (MGA 360 931), but a bit further at Mount Pindar on Kariong Ridge (MGA 354 923) there’s a nice view down Mullet Creek, Dangar Island and the Hawkesbery River.

Another 500m on is a quite deep waterhole, marked as “Pindar Pool” on some maps. It’s an ephemeral pool, and considering there’s been virtually no rain for many weeks, I’m surprised that the natural waterhole is so full. It would be a nice spot for a swim on a warmer day.

It’s not much further to Pindar Cave, an enormous sandstone cave. It’s hard to show the enormous-ness of the cave, which is about 15m deep and at least 50m long.

The cave would comfortably fit 20 tents along it’s length. There’s only one tent set-up in the middle of the cave (although on the way back I meet a few more groups heading to Pindar Cave for the night). 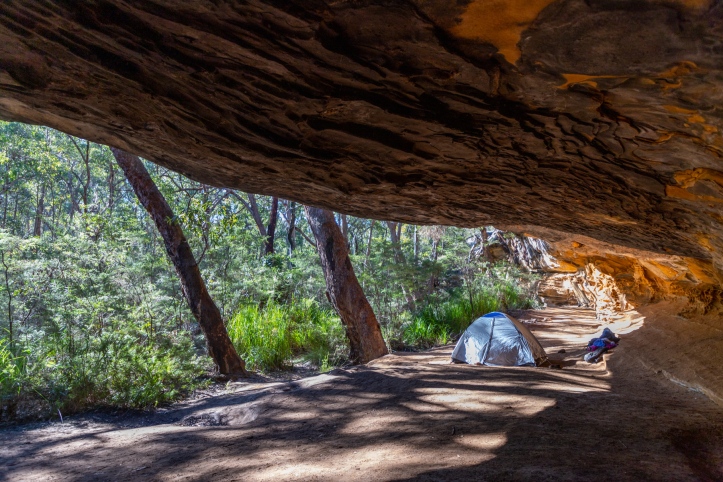 It’s possible to climb up to the top of the overhang, past a clump (is that the right word?) of orchids – but you can’t see much from the top of the cave. 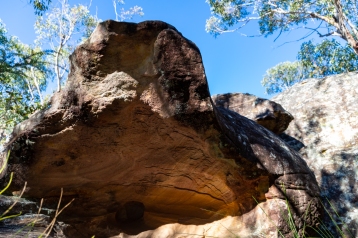 The track does continue a bit further, to a wide rock slab with a series of small cascades that are above a waterfall. (The track seems to stop here,  which is a nice spot to refill your waterbottle – but I’ve also read some track notes that suggest you continue across the rock slab and down to the base of the waterfall.)

I don’t linger here very long, as with my late start I now have about 2.5 hours to get to the top of Mt Wondabyne, if I want to catch the sunset… so it’s full speed back up the Pindar Cave track, and then left onto the Rifle Range Firetrail. After 600m along the firetrail, there’s a clearly marked junction with the Great North Walk (Hawkesbury Track). 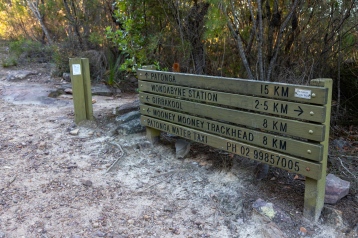 The narrow bushwalking trail descends immediately into a valley, so progress is fairly quick. 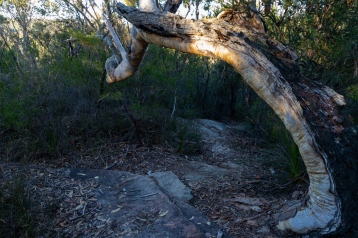 The track crosses Myron Brook at the bottom of the valley above a small cascade; the rocky creek bed is surrounded by ferns and dense foliage. 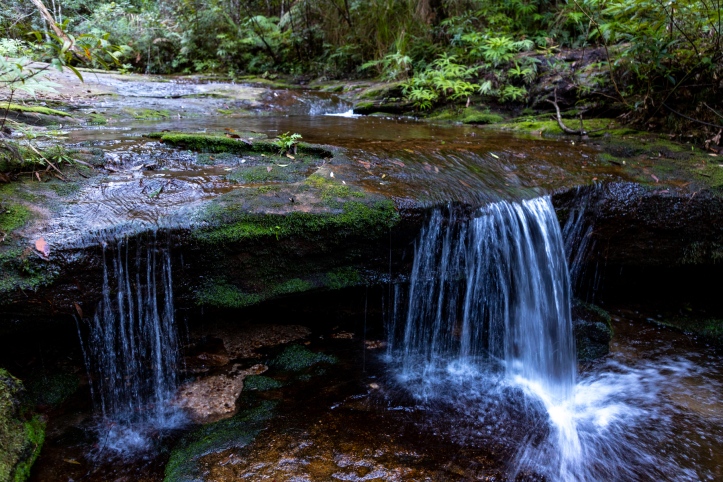 Just below the small cascade is a small pool with a teeny sandy “beach” – it would make a nice spot for a swim on a hot day. 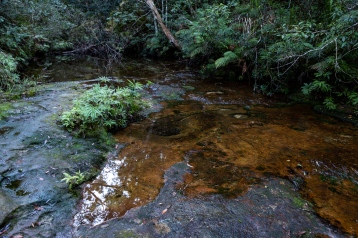 The track heads up some stone steps and along a large wall of sandstone, before a short descent to Kariong Brook Falls. This is a stunning spot, especially late in the day, with no-one around. Set in a rainforest-like environment and framed by tall trees, the Kariong Brook cascades over multiple tiers into a deep pool.

Unfortunately, from Kariong Brook Falls it’s all uphill, past the large cliff and rock overhangs next to the waterfall and along a couple of section of rough stone steps. After a short (800m) but stready climb the track reaches Thommos Loop firetrail, a wide management trail. 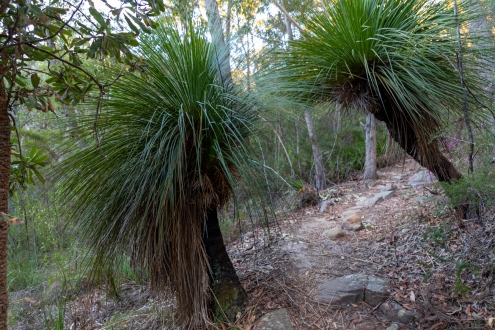 The track flattens out for a while along the firetrail, so I can pick up the pace again for the next 1.5km. After crossing a large rock platform, from where I can see Mt Wondabyne in the distance, a narrow track marked by a GNW sign takes me back onto a narrow bushwalking trail. It crosses another long rock ledge, and there’s another glimpse of my destination, almost glowing from the later afternoon sun.

The trail is pretty well marked, as I join the wide Mullet Creek firetrail for a few hundred metres, and then turn onto the Mt Wondabyne Trig firetrail. The pressure is on now: there’s about half an hour left to sunset, and the trail is starting to ascend again. Another 15min and I reach the (unmarked) track up to the top of Mount Wondabyne (at MGA GR396 924). It’s the home stretch, with the sun now very low in the sky. 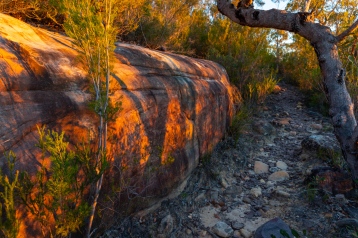 After the initial ascent which is quite gradual, there’s a steep section up a rocky ridge. A nice cave with a sandy floor about a third of the way up would make a great camping spot for a very small group.

The ridge eventually flattens for a while, before the last short scramble up to the summit. 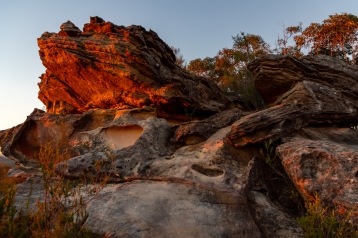 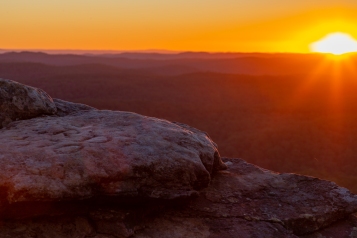 I’ve made it before the sun sets by literally three minutes. There’s an old trig point on the rocky peak of Mount Wondabyne, which despite being only 251m above sea level is one of the most prominent peaks in Brisbane Water National Park.

To the east are sweeping views toward Woy Woy and the surrounding central coast suburbs. 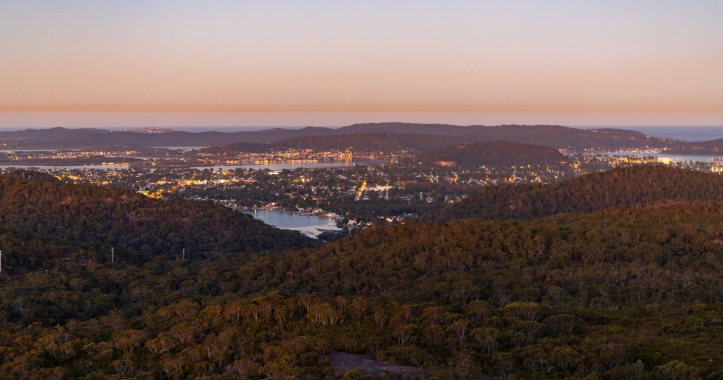 To the west is Brisbane Water National Park, with the lights of Wondabyne station (and an approaching train) visible below.

As the sun sets, there’s just the almost incongruous glow of Wondabyne station looking east, while to the west a sea of lights reflects the dense population of the central coast (I even manage to capture what I think must be a couple of meteors!). 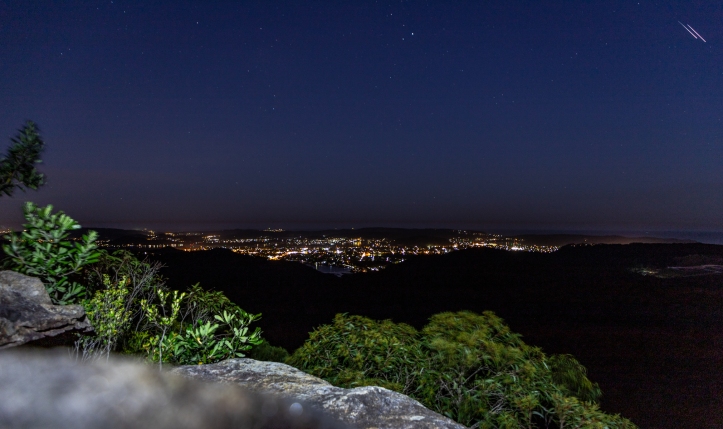 I’m not in a rush to complete the bushwalk, now that the deadline of making it to the peak by sunset has passed. After the light has completely faded, I head back down to the firetrail, and continue past the Mount Wondabyne campsite. There’s a couple of groups camped here. It’s a small, open area right next to the firetrail. Not a bad spot, but not particularly nice either. A sign at the campsite points to Patonga, which is the direction I’m taking. The firetrail heads downhill, supposedly with views back to Mount Wondabyne and out to Woy Woy – although it’s pitch black so I can’t see anything beyond about five metres! After about 500m I reach a junction with the the Tunnel Track firetrail, which I follow. At the next junction, where a bush track heads south to Patonga, I turn left (east) onto Dillons Trail. This service trail winds down to finish at the Woy Woy Waste Management Facility. A crude gap in the fence allows access through the locked gates, and to Nagari Road (the access road to the landfill site). There’s another locked gate near the start of Nagari Road, with another locked gate that has a gap for walkers, before the road joins Railway Parade.

It’s not the nicest way to end a bushwalk, finishing at a landfill site and experiencing some sewage smells along the dreary walk down Railway Parade. But Pindar Cave is spectacular and watching the sun set from Mount Wondabyne was a nice way to end the day. In many ways this bushwalk epitomises the Great North Walk – some shitty sections you have to endure combined with some of the best bushwalking around Sydney.